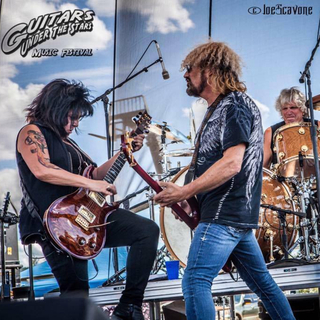 The original Guitarist for Kim Fowley's LA punk rock band Venus and the Razorblades. Currently performing with Jeff Kathan (formerly the drummer for Paul Rodgers), and Lynn Sorensen (formerly bassist for Paul Rodgers and Bad Co., current bassist for Heaven and Earth).
The founder of Play Like a Girl records. .playlikeagirlrecords
“I Want to Be Where the Boys Are,” co-written by Roni Lee and Kim Fowley, became a regular part of the Runaways’ live set. The song was included on the 1977 Live in Japan album. It went GOLD. “I Wanna Be Where the Boys Are” most recently has been featured in the 2010 Runaways biopic and sung by actress Kristen Stewart and in 2011, “I Wanna Be Where the Boys Are” was covered by punk band F-13 on a Runaways tribute disc.
Roni’s vocals and guitar techniques span various genres . She has lent her talents on numerous recordings on gospel, funk and rock. Her current original rock project includes backup musicians that are over-the-top talented and amazing in their own right and her touring while focused mainly on the West Coast from the Northwest to San Diego and all point between, she also tours over-seas to entertain and rock the world!

I am an endorsed PRS Guitar and Soldano Amp artist. Play a 100 Watt Soldano Head with a Orange Cabinets. A wireless Shure guitar system a couple of pedals.