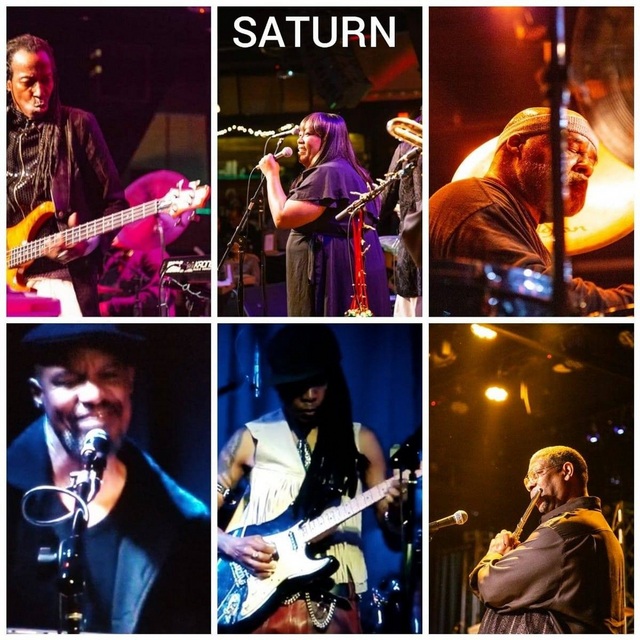 Funk, Soul, R&B, Smooth Jazz, Gospel and Rock are all a dynamic mix live and onstage from this Los Angeles based band; plus fuel by the dynamic swirling sounds of the"Rings Of Saturn Horns". It's all about the music from "The Coolest Planet On Planet Earth." Keeping the flaming torch of funk alive.

Incorporating funk, R&B and soul with elements of smooth jazz and gospel. Saturn's talents have earned them much recognition by industry notables for
their writing, arrangements and high-energy stage performances. Visually dynamic on stage, the Saturn sound is unique. Blending ethereal, harmonic vocals with
slick, but polished grooves and tight, powerful rhythms are surrounded by the swirling horn arrangements of the 'Rings Of Saturn' horn section. Saturn has
shared the stage with rock alternative bands, crossing cultural and genre barriers, winning new fans, young and old alike.

"Lisa offers a polished sound, look and feel to the group, with her soulful, powerful vocal stylings, from the ladies' point of view. The Diva Is Back!" says Ramahn. Her vocal collaborations with Ramahn are a colorful, musical adventure into the very core of the Saturn mystique. A soulful journey which at
show's end, In addition to the soulful music of 'THE COOLEST PLANET ON PLANET EARTH,' the choreography, special effects, fog, lasers, lights, spacemen and a

visual replica of the planet itself are dynamically stunning. But it's the music led by the charismatic, Ramahn whose high energy on stage takes him here, there, and everywhere. Totally in sync with the thundering drums of Lane, without missing a note.

Some of their fan favs include the silky - smooth ballad, "LOVE STARTS WITH YOU"has become a wedding anthem. The spicy - salsa filled, "COMING FROM THE HEART" will inspire you to take salsa lessons, while the tell it like it is , message driven "KEEP IT REAL" does just that. Marie holds her own with three covers:
two by Loose Ends, "SLOW DOWN" and 'WATCHING YOU' is a funky, bass fueled montage of scat vocals by Marie, Ramahn, and McLeod, blending perfectly to a high energy climax. The third is and their version of 'FREE (WANNA BE FREE)', that would make Deniece Willliams proud. The Earth, Wind and Fire - like title track, "LIGHT OF LIFE" their debut album, is a song about faith, hope, prayer, destiny, victory and peace. 'You can't have one without the other.
Most people don't understand that,' Ramahn says. The soaring, angelic - like vocals come through crystal clear and oh, those heaven - sent horns.

Look for their sophomore effort entitled, "REDEMPTION" set to be released in the near future, will feature 9 songs of all original material , including the 2019 Akademia Achievement Award winning, single EP, "CONFESSIONS OF LOVE" with at least three others set to be released as singles.
There will be a CD release party to kick-off promotion for the albums.