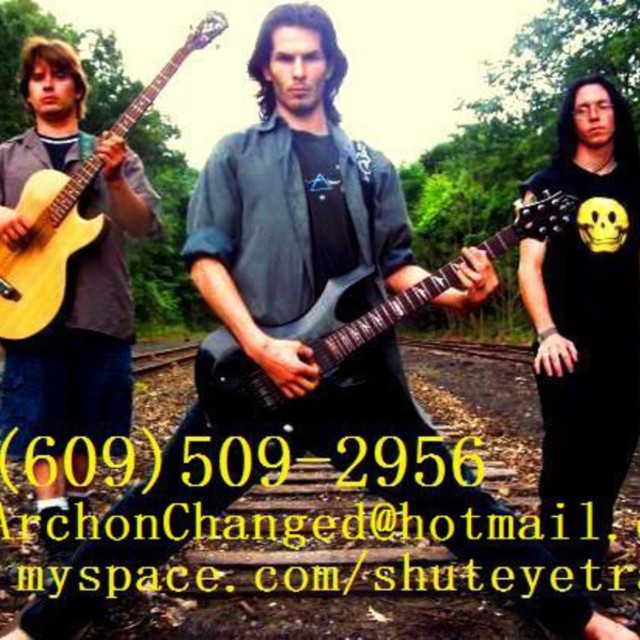 What we do is Rock Music. PERIOD!!!
Fu<k all the BS sub-labels like "Hard-Rock", "Metal", "Progressive", "Emo"(I really hate that one), and such. We write, play, and perform ROCK MUSIC, and it is ORIGINAL!!
Let me state that again: ORIGINAL!!!
We are performers, We put on a show, We entertain. Most importantly; We love doing it.
HOWEVER(and this is why we have a profile here, folks):
Looking for strong lead female vocalist who can skillfully play a guitar, willing to switch between lead and backup parts to off-set the male leads, sometimes in the same song...Some of our songs were written specifically for female lead vocals...male vox can get by on them, but...A female voice would be better.
ShutEye Train is (again!)an ORIGINAL MUSIC band, in the Modernized Pseudo Psychedelic Harder-Edged Rock range (that's a mouthfull, I know, but I hate using standardized labels)...seeking serious, "go all the way" players for Lead Vox (female preferred), as well as keys.

Our influences are widely and wildly diverse, ranging from Pink Floyd(!!!), Bauhaus (!!!), Metallica, Quiet Riot, Blue Oyster Cult, David Bowie(!!!), Bob Dylan, The Talking Heads...all the way through the spectrum of sonic mastery of Beethoven, Bach, Tchaikovski, and Pangernini. If I had to choose an "all-time favorite", though...that has to go to Pink Floyd. Their technical ability, lust for sonic experimentation, and awesome natural talent combined to create the band that truly deserves the Highest accolade that music has: Timeless.

ALOT of equipment: Too much too list, suffice it to say that the mix includes Marshall, Hartke, Peavey, Gibson, Fender, Samson, NAD, Mackie, Behringer, Roland, Lexicon, Alesis...
We have a massive stage set up; (PA and backline), and our own PROFESSIONAL LEVEL recording equipment, and stage effects/light-show.