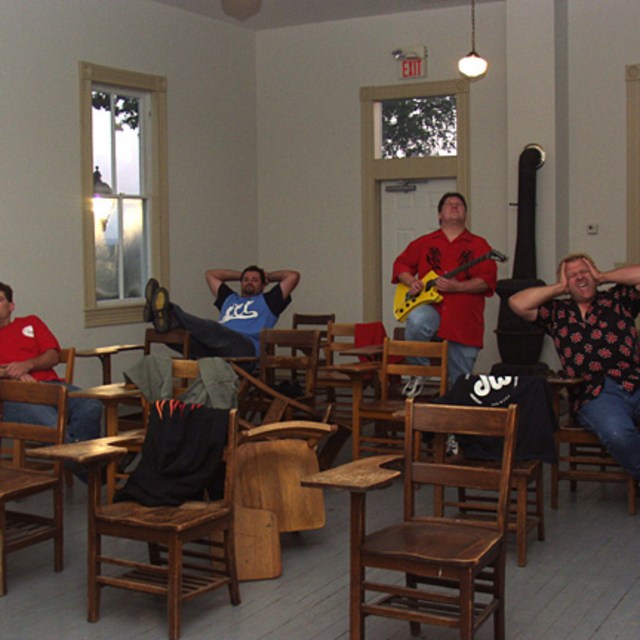 The name "Teacher'z Pet" is a more fitting name than most would realize. Front man Steve Waters and lead guitarist Mike Makowski both earned bachelor's degrees in vocal music and subsequently taught high school music in area schools for several years before becoming the "Teacherz" you all know and love.

Teacher'z Pet, a local cover and original band that's been rocking the KC metro area since 1996, is a purveyor of an extremely diverse set list that appeals to everyone from today's Generation Y'ers and X'ers all the way back to the Baby Boomers. This multi-talented group of thirty-something musicians, definitely puts on a show you can't afford to miss.

You can catch the Teacherz playing regularly at many area clubs and venues. They are available for all types of private parties including receptions, graduations, reunions, etc. The band is continuously updating its lengthy set list with current hits and original compositions, while staying polished on the classics and super-hits of years past. Hire the "Teacherz for your next event, and it will become an instantly unforgettable one!

The first thing about Teacher'z Pet that grabs you is Steve's amazing range (this guy has some pipes!) as he croons to the ladies on a slow tune and then immediately turns around and hits the Robert Plant, David Lee Roth, or Vince Neil-type high notes. Just wait 'til you hear his inflection of "Dream On" by Aerosmith. He has worked hard on sharpening his voice to razor sharp definition, and has clocked over 9 years of serious private vocal training on his way to a Bachelor of Music in Voice. He earns continuing education credit by putting it to good use at every show.

Paul Waters pounds the skins, adds some tight harmony, and gives Steve a break on lead vocals regularly. He takes the lead on crowd favorites including "Keep Your Hands to Yourself, and "What I Like About You. He puts the fans on the dance floor. Paul has the God-given talent that every drummer wants, and many study years to attain, but very few ever really achieve it. Paul seemed to come from the womb with a rock-solid, steady pulse. Fans often equate his style with Zeppelin,s drummer, the late John Bonham.

Mike brings the crowd to their knees every time with guitar solos on his favorite axes. You can also catch him adding to the songs he plays with his own back-up vocal stylings. Thanks to modern wireless technology, you'll frequently find him grinding a solo out among the audience. This guy loves the fans and they love him right back!

You may recognize the bassist for Teacher'z Pet as a Kansas City rock icon. He is none other than Sam Lee, the bassist who toured with the local band Rampage from 1979-1990. Sam rounds out the tight harmony for the quartet, but just wait till you hear him take the lead on "Surrender. The radio version will never sound the same again. Sam is wireless as well, so look for him adding his thumping bassline while he,s out among the crowd. Watch out for flying picks, though!