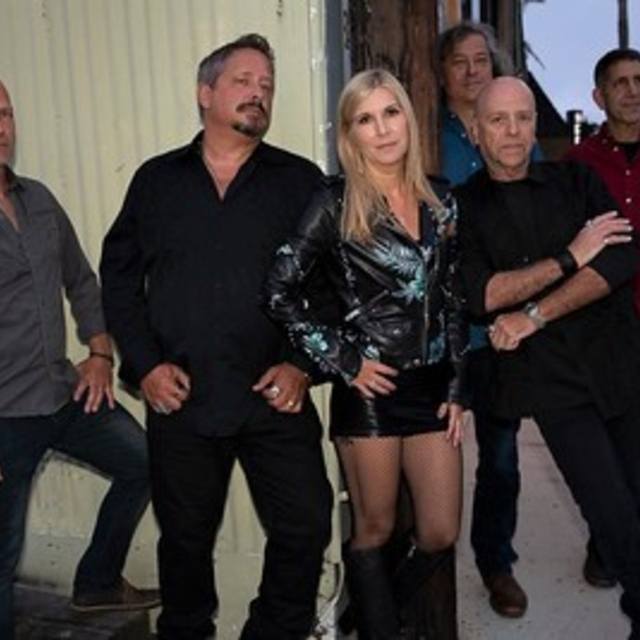 Sometimes Julie, one of San Diego’s most engaging and original rock bands, emerged from a chance collaboration between singer-songwriters Monica Sorenson and Rick Walker in 2012.

Walker, former guitarist for Chicago’s Greeley, is a multi-instrumentalist who reveals his rock and roll genius as he defines Sometimes Julie’s unique sound. Sorenson paints the pictures, finds the words, tells the stories, and delivers the melodies with her powerful vocals. Walker is the theory, the rhythm, the science, the skill, and Sorenson is the front woman who is all heart and art.

The duo’s first collaboration gave birth to their award-winning 2014 debut CD, HEAD FIRST, the title track of which generated substantial buzz, getting spins on both terrestrial and internet radio, and won an Akademia Music Award for best Americana music video. As implied, this album is all about being impulsive, taking risks, and doing what you love.

Sometimes Julie’s second release, the EP entitled BRIGHT SIDE OF THE LINE (2016), marked the duo’s evolution to a more rocking sound as they were joined by the eminently talented Berklee-grad Bruce Paul Allen (bassist/co-writer), and San Diego music scene legend, Anthony Sarain (keyboards, sax, flute). The songs on Bright Side speak to the power of intense love and profound loss.

BREAKING, released in June 2018 to resounding critical acclaim, represents a quantum leap in the band’s evolution. It rocks hard!!! Hair metal refugee Alberto Moreno, lead guitarist and pivotal member of the band, truly shines on this EP. His energy and showmanship are something to behold as he and Sorenson play off of each other’s voices in these hard-hitting tunes about pushing it to the limit.

Sometimes Julie is exploding now with the addition of San Diego music stalwart, the one and only Dave Fuller (drums). Dave’s unique style and groove appear effortless as he holds the beat for Monica, Rick, Al, Bruce, and Anthony, laying a solid foundation, granting freedom to claim new musical territory.

WHERE ARE YOU?, Sometimes Julie's fourth, and latest release (2020), is truly a full-band affair with each band member's musical influences worn plainly on Sometimes Julie's proverbial sleeves. From Sorenson's distinctive voice and provocative lyrics, to Moreno's aggressive guitar, to Allen's melodic bass, to Sarain's sublime sax, to Fuller's rock-steady drums, to Walker's intricate arrangements - it is all there waiting for the taking.

Sometimes Julie performs hard-driving rock with deep-seated blues and Americana influences. Their raw, sexy sound will stir up your passionate side!

Part of what makes our music interesting is that our influences are so numerous and varied. Not only that, but while we do share several musical influences, Monica's and mine (Rick's) are pretty different. Monica is influenced by Janis Joplin, Bob Dylan, Natalie Merchant, Lana Del Ray, Sheryl Crow, and Grace Potter. I am influenced by The Kinks, Led Zeppelin, Tom Petty, The Beach Boys, Dire Straits, Bruce Springsteen, and The Pixies. There are several musical influences that we do share, though, including The Beatles, CSNY, Bonnie Raitt, Lucinda Williams, and The New Pornographers.

While on some level we are of course a product of our influences, Monica and I really don't set out to sound like anything or anybody when we write our songs. The music that comes out of us is honest and authentic. It is us.