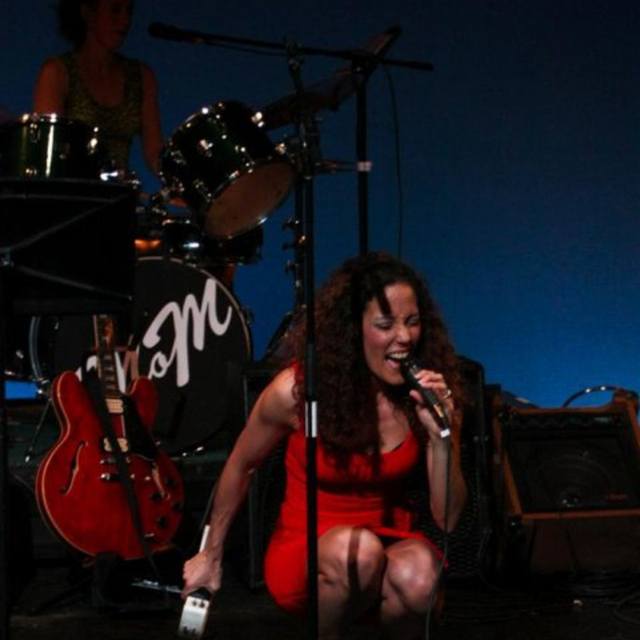 I got my start in music playing classical flute, following in the footsteps of my older sister. From that early age, I have nurtured a passion for music that took me from 3rd chair flute in her grade school band to become the founder and lead singer of an explosive soul/ pop/ rock band that toured for 15 years.

In my late teens/early 20s I pursued a career in modeling, even traveling to Italy to look for work. When I returned to the US, I spent time as a musician for hire singing and playing for various bands. Having learned to play the bass guitar, I got a gig playing with Bill Popp and the Tapes, and appeared on one of their albums.

Around 1995, realizing that I needed a solid band to get my original music off the drawing board, I drew upon my contacts in the New Jersey music scene and formed her groundbreaking soul/ jazz/ pop ensemble: blue number nine.

As a four piece accompanied by various back up singers and horn players, blue number nine was a success. Audiences loved the band's onstage energy and the band went to the studio where we produced several albums. I produced and recorded three albums with blue number nine and developed a loyal fan base attracted to their organic mix of soul, pop, and jazz.

Other experiences: Sang in a couple of cover bands in NJ, was the lead singer in the zydeco group "Zydeco Revelators" for a year. I also played rubboard. We did a mix of originals and covers. I left the band in 2016. I was in the horn section of buzzuniverse for 2 years from 2007-2009. We played a reunion show in December 2016. I also performed in "MoM - A Rock Concert Musical". We performed the show for 4 years in NYC, NJ, Rochester, NY and Oneonta, NY. I was a founding member. In the show, I sang, acted (new for me), played bass, percussion, blue and sax. See: momrock on .

I am moving to Knoxville July 1 and would love to find some musicians to work with. I am versatile, flexible and can fit in any environment. I also move well on stage and am a dynamic front woman but also enjoy simply being a side woman.

You can also visit blue number nine's website which is still live though the band ended in 2009. bluenumbernine with com at the end!