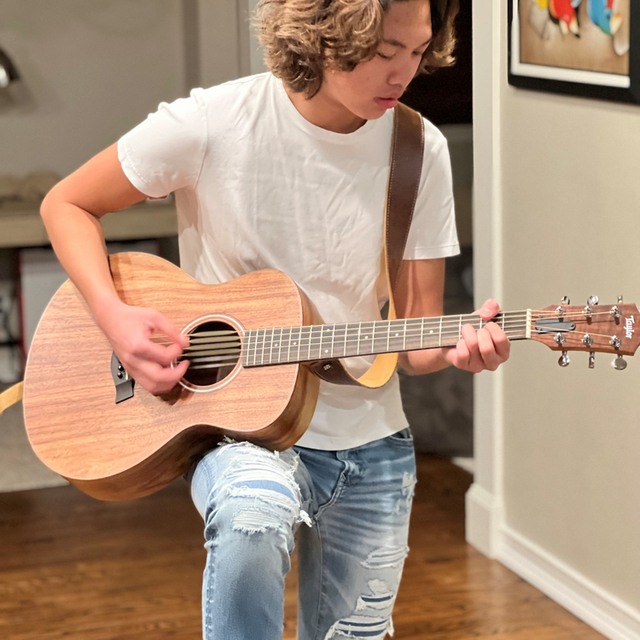 IG: slking_music
In 2020, during the height of the pandemic, Stevie Lee King took full advantage of the solitude. He was 14 years old and had just finished 8th grade. As many kids do as they mature, he had become more in touch with his likes and dislikes. He’d been playing middle school football for several years because that’s what his friends did. Stevie didn’t necessarily like it, and he wasn’t particularly good at it, so he quit. He had been lightly taking guitar lessons that year, but during social distancing recommendations he became obsessed! He spent hours upon hours every day practicing guitar and writing songs.
In 2021, Stevie released his first song, “Marilynn.” It was inspired by a compilation of posts of his friends he had seen on . They were riding skateboards, some had new piercings, and all were taking full advantage of the free time of summer. Everyone was growing up and experimenting with their individuality and persona. Stevie Lee King harnessed those images and translated it to a chill track. “Marilynn is the coolest girl in the world! She’s pretty, fashionable, but she’s got a bit of an edge to her. It’s a song that celebrates peoples differences because everyone is different. I instantly fell in love with her!” he says.

Stevie continued to write and post his music on . He started to gain popularity. An organization called, “Kids Rock For Kids”, invited him to be a part of their virtual band. KRFK is a non-profit organization that helps raise money for kids in need. He was teamed up with several other musicians around the world to cover “Can’t Stop” by the Red Hot Chili Peppers. The video was the most watched video performance on KRFK’s page! King started out with just 60 followers, but today he has over 1,300 followers and counting. But when asked, he sincerely claims that he doesn’t do it for followers, or likes, or comments. He does it because he loves music and it’s his passion.

Stevie has performed at several local restaurants and bars as a one man act, but expect to see more of Stevie Lee King as he’s just getting started!