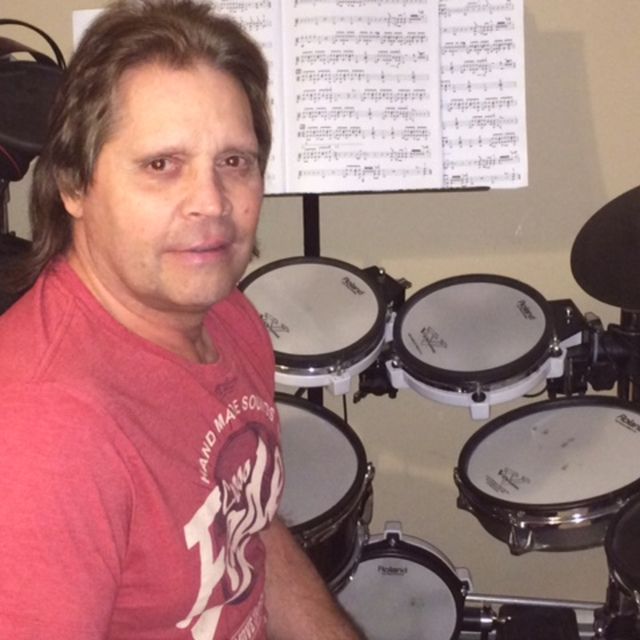 Audio samples at bottom of page must be heard on a pc with windows.
Born in San Antonio, Texas into a career military family. Lived in many different locations throughout the US and Europe. Finally settled in Manchester. Became very interested and started to play drums at 8 y/o. Don’t be fooled by my age. I am up to date on current drumming styles and trends and I still have PLENTY of FIRE in the burner, when the need arises. Also, my cover picture was taken about 6 years ago.
In the early 70s, I studied acoustic guitar as a side project. Then in the mid 70s studied trumpet to get a deeper understanding of music in general, as well as music theory and reading.
When performing live or in a studio, my focus is on dynamics and balanced volume levels. No drug use period .... No alcohol during rehearsals, recording, or live performances.
I've played in many different bands, covering a very wide variety of styles/genres over the years by choice to gain experience in as many areas as possible, and to broaden skills/abilities. The total gig number I have played over the years would probably be at least a couple of thousand.
In the mid 60s at 15, I was accepted as drummer in one of the hottest NH/VT/ME/MA Top 40 Dance Bands of that time. The band was a popular opening act for many major Gold Hit Bands of the day such as The Beach Boys, Tommy James + Shondells, Paul Revere + Raiders, Outsiders, Turtles, Kingsmen, The McCoys, The Seeds, ? Mark + Mysterians, Sam Sham + The Pharoes, Keith, Royal Guardsmen, Barbarians, Guess Who, The Standells, The Knickerbockers, Johnny Rivers, Donovan, and a number of others. We appeared often on NH Bandstand, a live weekly NH TV spin off show, of Dick Clark's American Bandstand.
We received an offer from The Young Rascals, to go on tour with them as their opening act.
In 1976 I received an offer to go on a world tour with the The Flamingos, (I only have eyes for you). My experience covers a wide range of band sizes/configurations from 2 to 6 pc cover bands, as well as 7, 8, 10 pc showbands. In the early 80s, a 12pc Show/Dance/Tribute/Choreographed/Comedy Routine Vegas based Legends Show Band "GoldRush" moved their whole show from Vegas to the Boston area as house band position at a premier show room 6 nights a week year around. Their drummer
quite and moved to CA. shortly after and I took his place.
The following are some of the bands I've worked with ................... Hot Property, NightClass, Pandora, Double Standard, Broadcast, Probable Cause, KingsCross, Love Portrait, The Fantasmics, Rhythm Kings, Joe, Lee and Marcel, Us, Danny and Marcel, Crown, Lee Taylor Band, PM Blues, Us, Lock, Stock & Barrel ....
Live experience covers the bar, club, lounge, hotel, casino, and concert venues, both FT+PT, as well as weddings, conventions and functions .... local/regional/touring.
During the summer months, played extensively in all 10 of the bars at Salisbury Beach at one time or another in the 70s + 80s. In some of those bars, we performed 7 nights a week plus a 4 hr. Sunday afternoon matinee, for the entire summer each summer. Also played Hampton Beach Bars, The Hampton Casino, Coastal Maine and Coastal Mass and in The Keys.
Experienced in playing with a click and backing tracks, in both live + studio applications. When singing lead vocals, the following songs are examples of what I like ... Hurt so good, Maggie May, Bad case of loving you, Two tickets to paradise, Dancing in the dark, Dirty white boy, Double vision, Working for the weekend, Who say's you can't go home, Once bitten twice shy, You give love a bad name, Can't fight this feeling, Take it on the run, Keep on loving you, Dude looks like a lady, Walk this way, Under the
boardwalk, most anything from the Young Rascals, Beach Boys,
Outsiders, Tommy James, P.Revere+Raiders, etc.
I've been performing technical/multifaceted drum solos for the past 50 yrs. It's part of what I bring to the table, and it is a very important outlet to the creative, spontaneous, improvisational side of my musicianship. I typically perform them during the last break of the night, as the band exits the stage.
They are performed at that time for two reasons ... It does NOT interfere/reduce/cut into the bands regular performance time, and it allows me to concentrate fully, without stage distractions from restless musicians. Solos are performed at a Pro Level, and are always well received by patrons and venue owners alike.