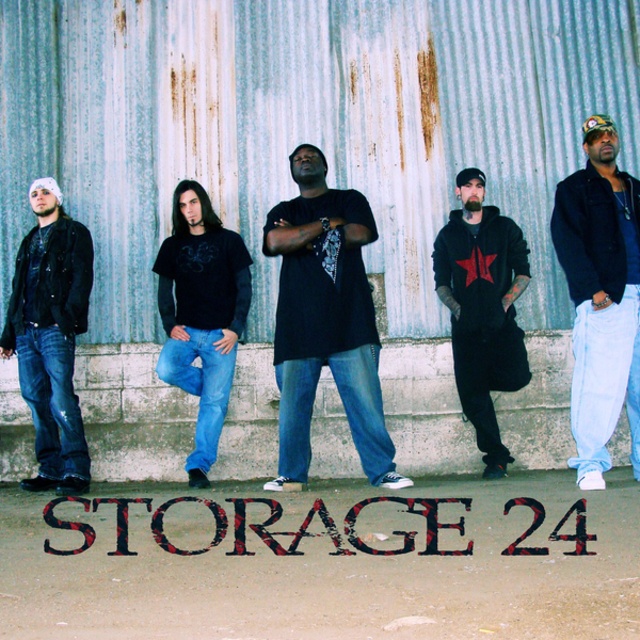 Storage 24 was named Band of the Year 2009 Battle of the Bands at Club La Vela, Panama City Beach, Florida, Largest club in the USA, beating out 9 other bands from all over the Southeast.

Also named Best Rock Band and Best Original Band at the Best of Jackson 2010 and 2011 Awards in Jackson, MS.

Hailing from the southern state of Mississippi with a unique combination of hard rock, hip-hop, R & B and elements of electronica is the band Storage 24. The band is affectionately named for the storage unit it rehearsed in and still holds its humble and honest yet aggressive energy it started with in its early days.

Baby Phred is the brainchild of this dynamic group. Baby Phred originally began his music career with an R&B group called Risqué, however, over the years his musical interest grew more diverse and in 2000 he formed a rock band called Blindsyde which later changed its name to Storage 24. The band experienced several lineup changes before settling on its current eclectic mix of talented musicians; coming from many styles of the music and cultural world. Joining lead vocalist, songwriter and producer, Baby Phred are Lyricist Kamikaze, Guitarist Daniel Warren, Bassist Blake Thomas and Drummer Adam Williams.

Storage 24 has shared the stage with the likes of The Black Crowes, Three Days Grace, Breaking Benjamin, Puddle of Mudd, Ludacris, Coarse of Nature, Black Stone Cherry, Rehab, Atomship, Night Ranger and One Less Reason to name a few. In their hometown of Jackson, Storage 24 was voted #1 rock band in 2007 by The Jackson Free Press and Best Original and Best Rock Band 2010.