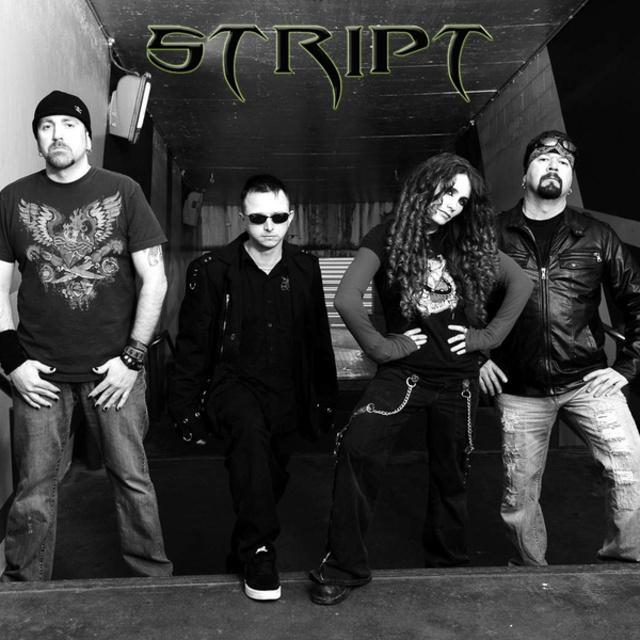 Serena Thomson - vocalist - has a vocal range that varies from singing with primal angst to sweet & angelic sincerity. Her vocals are delivered in a chilling, sometimes hauting, other times peaceful array that will leave you wanting more.
Tony Hernandez - guitarist, backing vocals - creates aggressive, melodic compositions and leads that have become a staple to Stript's sound.
Brandon Carr - bassist, backing vocals - is a fusion style bassist, combining multiple techniques to create his unique style of playing. B's energy and creativity help fuel the STRIPT engine.
Patrick Carrol - drummer - sets the varying tempos, while providing dynamic percussions, for the band; and keeps the utmost time for the various tracks played live w/backing tracks.

With SerenaVilleâ€™s energetic passion coming through in every vocal delivery; TonyTownâ€™s aggressive rhythms and creative leads; Bâ€™s innovative, lead-style bass; and Patâ€™s dynamic percussions all relevant elements in their unique, original sound, STRIPT is one of those things that was just waiting to happen.

Screen name:
STRIPT
Member since:
May 28 2013
Active over 1 month ago
Level of commitment:
Touring
Years playing music:
25
Gigs played:
Over 100
Tend to practice:
More than 3 times per week
Available to gig:
2-3 nights a week
Most available:
Nights

STRIPT is influenced by a wide array of musicians and genres, from death metal to blue grass.
Some of the more prominent influences include: Black Sabbath, Iron Maiden, Alice In Chains, Karyn Crisis, Testament,

Don't Miss STRIPT, as they will throw down in Kent with Charlie Drown once again at the Central Ave. Pub.

This one always packs the house, so get your tickets in advance