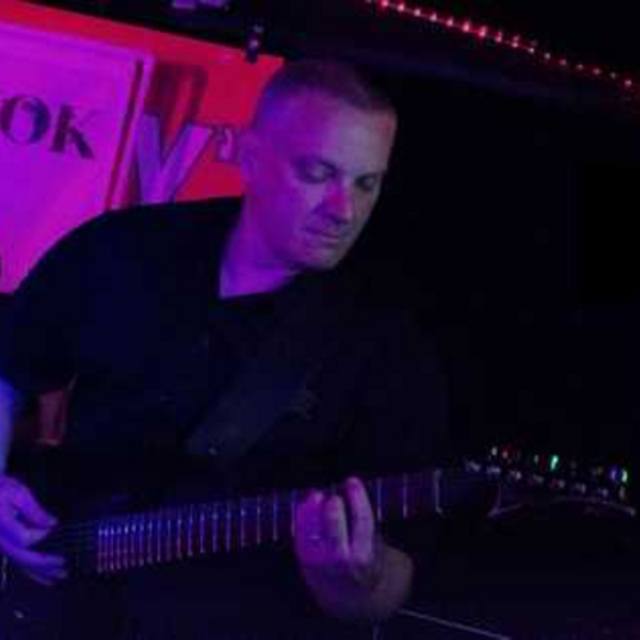 Hello! I'm a guitarist and veteran of some venerable Bay Area bands: Mind Furniture (prog rock), Machine Called Man (prog metal), and most recently Lipshok (vaguely-gothic metal). The resume is a bit misleading, though: I am really not a metal guy. At heart I'm a 70's/neo-prog nerd.

I've written songs, made albums, gigged all over the place, and am now looking for something close to my heart: a band that plays original prog rock. In particular I'd like to do something influenced by early Genesis (Trespass/Foxtrot/Nursery Cryme), Hemispheres-era Rush, Pink Floyd, the Canterbury scene. If you know these bands you know what I'm talking about: long songs, goofy lyrics, lush textures, 12 string guitar, Mellotron, vocal harmonies, big build-ups, mysterious interludes, odd time signatures, bombastic finales.

My intention is to write, record, and perform original music with an old-school prog rock vibe.

I play electric guitar (6- and 12-string), classical guitar, acoustic guitar, and fretless bass (though I'm not really looking for a bass gig) and I can sort of fake it on keyboards (chord pads and stuff, though I can handle some widdly-widdly analog synth solo stuff too as you can hear in the first track). I've also been working a little bit of electric violin into my repertoire. I can sing harmonies, but am not much of a lead vocalist because I have a voice not entirely dissimilar to Kermit the Frog. In addition to that stuff, I'm proficient with a few species of DAW, and am skilled at recording acoustic instruments. (I also play the lute, but that's kind of an eccentric sideline.)

Just to be clear: I'm NOT looking for classic rock, metal (not even prog metal, sorry), blues, R&B, pop, Christian contemporary, acid jazz, fusion, etc. My hat is off to you if that's your thing, but that's not what I'm interested in. I'm looking for old-school progressive rock or neo-prog. Not mind-fuckingly loud either -- metal was making me deaf, and I'm trying to preserve what's left of my hearing.

Most recently I played in the East Bay metal institution (their first album, Electress, was 23 years ago) Lipshok. The absurd volume level of live metal shows and weekly practice was killing my ears, so after two-plus years I had to bow out. It was a great experience though: Lipshok are the nicest people in the world, and wonderful musicians. And holy sh*t on toast what a learning curve: the guitarist on the album they released right before I joined was Glen Alvelais, formerly of Testament and Forbidden. The guy's an actual 20th level arch-mage of shred. Those were HUGE shoes to fill, and the jury is still out on what I filled them with.

I'd like to think my former bandmates would tell you I'm reliable, capable, easy to work with, a good collaborator, helpful, and amusing.

Pro chops, gear, and attitude, but not looking for a paid gig. I've got a career that's nothing to do with music.

The first audio track is a three-part prog rock thing I recorded recently. It gives a pretty good idea of what I'm into -- I played all the instruments (though the drum track is good old EZ Drummer). What I am looking for first and foremost is a singer/lyricist who can take music like that and do something fantastic with it. I am also looking for people who want to form a band to write, record, and perform this kind of music.

You can hear some other excerpts of what I've been working on at my web page: mr-neutron dot org slash inprogress.html

What else? Oh, hey, there's an ancient, crufty Mind Furniture song from 1999. I wrote the music for it when I was in Mind Furniture way back when, and it kinda shows its age. In addition to the first Mind Furniture album, this was featured on the CD "BayProg -- Progressive Rock from the San Francisco Bay Area" which was included with the Spring 2002 issue of Exposé Magazine. Which was nice. Evan Langert sang and keyboarded, Greg Miller drummed, Brett Barnett keyboarded, and Rick Andersen bassed. I played the guitar. It was recorded at Suspect Studios in Sunnyvale, California by the wonderful Dave Gakle, and mastered by ("the") Bob Katz at Digital Domain. Fun Fact: Mind Furniture are still around.

I've gotta get some Machine Called Man on here too. That was a rippin' band: dual 7-string guitars. One year we played The Gig That Saved Christmas, where (along with the magnificent Zero Hour) at four hours' notice we replaced Blind Guardian on the bill at the Pound in San Francisco on a rainy night in December, with Symphony X as the headliner. (FWIW Machine Called Man gives me an excuse to name-drop shamelessly. The singer was Norman Skinner, later of Imagika and now Niviane; the other guitarist was Paul Thuriot, formerly of death metal legends Jungle Rot and now playing in Locistellar with former Dragonforce and Nevermore musos. The drummer was Walter Massenkoff, who had played in Tramontane and 80's Bay Area metal stalwarts Laaz Rockit. And the bass player was Alex Sheldon, who was fresh out of college but had lineage, man: his dad is Stan Sheldon. Ever heard Frampton Comes Alive? Of course you have. That's Stan playing bass.)

Desert Island Discs for prog would be something like:

...but I listen to a lot of non-prog: Wes Montgomery, Django Reinhardt, Fairport Convention, Mahavishnu Orchestra (a BIG favorite), Robin Trower, XTC, Paul O'Dette's Dowland omnibus, the Paul McCreesh/Gabrieli Players recording of A Venetian Coronation 1595, the 1957 EMI recording of Il barbiere de Siviglia with Tito Gobbi and Maria Callas at the height of their powers... the list goes on and on and on. Big band jazz. Bebop. Vangelis. Dead Can Dance. Djam Karet. Heldon. Emperor. The Fall. Opeth. King Gizzard and the Lizard Wizard. Wishbone Ash. Javanese court gamelan. I once got a cassette tape of Javanese court gamelan stuck in my car's tape deck, and it was all I listened to for six months until I finally went after the bastard with pliers.

Good god, are you still reading this?

Oh okay, so. I've got a bunch of acoustic and electric guitars including several of the dreaded double necks, which I utterly, utterly love in part because they sounds amazing (the 12-string neck through an FRFR with the right sauce is almost piano-like, just gorgeous), in part because it's an unapologetically iconic prog axe, and in part because part of me is still fourteen and wants to be Alex Lifeson smashing those F#11s at the beginning of Hemispheres. Then there's Crumar MIDI bass pedals into a Moog Minitaur and a Korg minilogue xd; and couple of five-string electric violins (an NS Design and a Bridge Lyra). It all plugs into a Helix Rack, and a couple of FRFR cabs.

And, dammit, if that doesn't convince you -- I also have a pizza oven. PIZZA OVEN. No I'm not kidding.