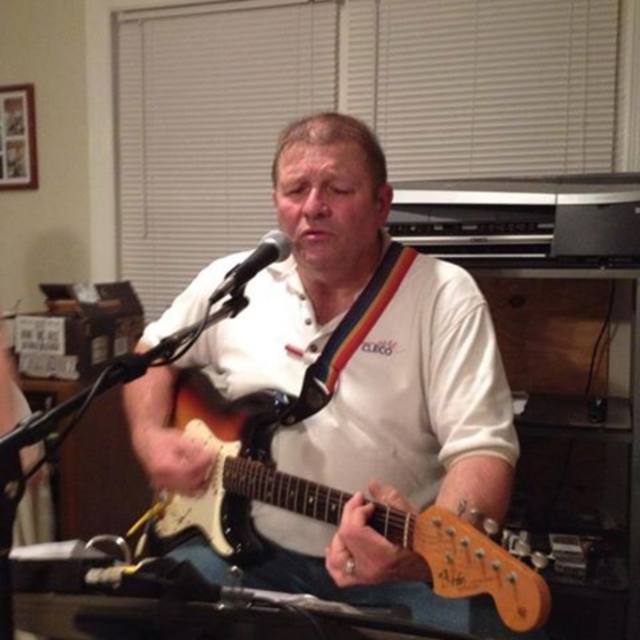 Hello fellow musicians, this is Swampy, Jim Knoch the old Louisiana Swamp-boy. Things seem to be looking up and I expect to be playing music again in another week or so. If you are longing to be playing music again, let's get together and jam as soon as we can safely leave the house. If you're interested, look near the bottom of my Influences section for Contact info. Thanks ... Jim

I am currently available should you be in need of an experienced bassist, rhythm guitarist, and / or vocalist on a temporary or permanent basis or even just to jam. My forte is singing lead vocals and playing electric bass and rhythm / lead guitar. My repertoire consists of 950+ cover songs including a few of my own compositions. My genre consists of Blues, Classic and Contemporary Country, Classic Pop, Classic Rock, Rock-a-Billy, Southern Rock, New Orleans Swamp Pop, Dixieland Jazz, R & B, Funk, and Texas Swing. Continue reading for further details.

I began playing music professionally in 1965 ... even before I entered high school. I financed my tuition & fees for high school & college by steadily gigging in New Orleans & the Lake Pontchartrain North Shore areas as well as along the Mississippi Gulf Coast.I lettered in Chorus while in high school and did receive voice training as part of the curriculum. I finally completed undergraduate studies in bio-medical and electrical engineering earning a Bachelors of Science in Electrical Engineering. I later went on to undertake advanced studies in power engineering, control systems, protective relaying, opto-electronics, electronic communication, and business administration.

My musical forte is playing the electric bass and rhythm / lead guitar (both electric and acoustic) and performing lead & backup vocals. I enjoy playing most genre of music, but lean more toward Country Music (Classic & Contemporary), Southern Rock, Rock a Billy, & Classic Rock, Oldies, New Orleans Style Swamp Pop, R & B, Funk, and Texas Swing. Currently I am playing electric lead / rhythm guitar & performing lead vocals with my band, Millennium Country. We play a full mix of the above genre, plus the occasional comedy song. Having not played the lounge circuit in a number of years, gigs these days are generally just for special events & parties.

Occasionally, I'll fill in on short notice for gigs or studio work if another group is in need of a vocalist / guitar player / bass player or keyboard player. I suppose I perform way too many gigs lagniappe, but hey, this is my leisure time! Besides, as long as it's fun, it's not work, no matter how heavy that equipment seems to be getting lately! Unfortunately, due to free time constraints with declining health, I am somewhat limited to playing local venues only, so another tour or distant venue is not possible at this time. I'm also not particularly interested in doing the lounge scene again and having to put up with all the drunks and brawls. (At my age, the reflexes aren't what they once were to duck fast enough to dodge the flying beer bottles, bar stools, and fists! I suppose I'm not as good as I once was in that department.)

I am currently trying to reform my band since going on hiatus awaiting my piano player's recovery from cancer surgery, Now, having retired from the day job, I have plenty of time to jam at your rehearsal and learn more tunes ... who knows, we may both learn a new lick or two! If you are interested, just contact me & we can work out a time & location details.

Should you have further interest, be sure to check out my "Influences" category, (look under the "Contact Information" sub-category for more details on communicating with me even if you're not a paying (Premier) BandMix member.)

My earliest influences were New Orleans Jazz and the big band music of the 1940's & 1950's. I recall a story my mother used to tell about me, still in diapers, being placed atop an upright bass and me slapping the strings at a rehearsal for Tony Almerico's band (Uncle Tony was a renowned New Orleans trumpeter / band leader, and local radio DJ during the period from the late 1930's to his passing in the the early 1960's.)

In my tweens & teens, I was learning to play Rock & Roll lead guitar and vocals as those mid 1960's new R&R songs were hitting the radio top 40 almost daily. One evening at a rehearsal, a parent of one of my fellow band members (of The Courtyard Hangmen) encouraged me to play a country tune (Your Cheatin' Heart) ... Rolling Stones nor Hank Williams it wasn't, but with that invitation, I was now playing Country Music. I was surprised at the applause from all of the other parents was all the incentive I needed ... it stuck with me so I learned several more country tunes and I developed an interest in & liking for Country Music ...having just lost my mother to cancer, I suppose many of the lyrics struck close to home and the simplistic musical structure made it easy to play, and since my fellow Rockers refused to play any Country Music I joined an unnamed North Shore band and began playing weekends with my cousin Jack Ussery, playing several festivals and we became regulars at Buster Bosco's in Locombe which worked out fine for me since I was still too young to play the bars. When I reached my 18th birthday, I began playing at local clubs with un-named Country bands and played nightly as the house band at King's Lounge with Bob Sargeant, also at The Western Lounge as well as the Rogues Gallery in Harahan. After playing with several different bands and many nights of performing under the belt, I eventually landed gigs playing guitar & bass (both acoustic & electric) as part of the house bands for the South Louisiana (Ponchatoula) Hayride and the Bogalusa Hayloft, where I was privileged to play behind a number of Country Music's big names of the mid to late 60's while they toured the area. I even did a stint on New Orleans TV in the late 60's playing bass with a North Shore Country group (The Rollin' Wheels) while backing up a local female vocalist (Linda Christ). Word of caution here, don't ever get talked into riding down in the elevator of a high rise with all of the band equipment unless you like free falling without a parachute! Yes, I drew the short straw!

In the early 1970's, I found myself playing Rock & Roll for the teenie-boppers and Country & New Orleans Swamp Pop for their parents as the house band (Ms. Polly's Goof-ups) at the Silver Spur on Jefferson Highway... it was really satisfying being able to play something enjoyable for just about everyone! I continued playing electric bass and lead & backup vocals throughout much of the mid to later 70's with a New Orleans Oldies group (Denis Lopez and The Everyday Special) ... I sure loved the sound we had when those saxes & trumpets filled in or took on the lead in those swamp pop tunes!)

After graduation from University of New Orleans, i left New Orleans for Houston to start my professional engineering career. While there, I sang lead vocals and played lead & bass guitar for a couple of years in the late 70's (1978 thru 1980) in and around the Houston, Texas (Pasadena, Tx.) area doing the club scene at Gilley's... once again playing Country Music (I think we literally wore out 'Looking For Love' doing that gig at Gilley's! Just as "The Urban Cowboy" was making it big at the theaters ... 10 times a night was just playing it too many times even with all the $20's & $50's in the tip jar, and it never became one of my favorites!.) On breaks between sets, as a bonus, I did learn how to hit the floor softly without hurting myself when the mechanical bull tossed me.

I left Houston and moved to Pearl River, Louisiana in March of 1980 taking the position of Distribution Engineer for the North Shore division of the electric utility, Cleco, and soon I was playing electric bass and performing lead and backup vocals with a Slidell, La. area Blues / Classic Rock cover group (The Last Chance Band). I stayed with this group from the mid 80's until we finally disbanded in the mid 90's. Soon afterward I again began taking on lead vocals and playing bass, rhythm & lead Country Music with a number of different local bands (Reushaw Crawford, Marty Singletary, Joyce Malley, Jim Kinney) and many other back porch guitar pickers in the Pearl River area. Eventually, I applied a name to the group of regulars so that the campground that was booking us for a big outdoor party, could advertise ... hence Millennium Country was born (see Millennium Country in Bandmix). We continued performing locally in Southeast Louisiana & Southern Mississippi, but mostly just for parties and special benefit activities. We performed regularly until my piano player and very good friend, Jimmy Singletary, suddenly got ill and had to have surgery for the cancer in the bones of his upper palate and sinus. His recovery has been very slow, but I decided to stay with him to support his recovery. Unfortunately, the other band members soon grew tired of waiting and drifted off in other directions.Now, as he and I have exceeded retirement age, health concerns have shown up, also the desire to load and haul all that musical equipment around to play gigs has become less and less appealing (even with the grandkids acting as roadies!). While we didn't perform public venues all that often ... when we did, we ate well, drank a lot of beer, and passed a grand old time! Laissez les bon temps rouler!

Based on my experiences, we perform a mix of many types of music specifically catering to the desires of the audience. We play numbers from the 1950's through 1960's Blues, Rock N' Roll / Rock a Billy / New Orleans Swamp Pop era, as well as Classic and Contemporary Country Music, Southern Rock, Western Swing, some 60's R & B and some Funk, we cover just about anything the listeners request, provided they get up and dance to it.. My repertoire is a growing compilation of more than 930 tunes & I'm always working out & adding new cover tunes as well as penning a few originals as my muse rises. I always like to slip in a comedy tune or two to keep the patrons active.

Since the BandMix' Terms of Use (TOU) does not allow me to list contact information in the "Description" area and they will actively filter out any email addresses, hyperlinks, and phone numbers, (But they didn't say anything about listing it here!). You can contact me by email to {jimknoch at hot mail . com} [leave out the spaces and change the "at" to the at symbol. ]. If you contact me by email, I'll reply as soon as possible. If you prefer, feel free to call me at my Home, (985)-863-3316 ... I have voice mail in the event I am not available when you call, so just leave a message and a return number. If you prefer to text or call my cell it is (985)-807-6729. You can also contact me via Face Book Messenger to Jim Knoch. I check FB Messenger regularly since it is also a great tool for connecting with other musicians. I am listed on a free app called BandFriend, which also makes communicating with musicians somewhat easier.

Practicing social distancing instead of music.

Practicing social distancing instead of musi.

Practicing social distancing instead of music.

Practicing Social Distancing Instead of Music