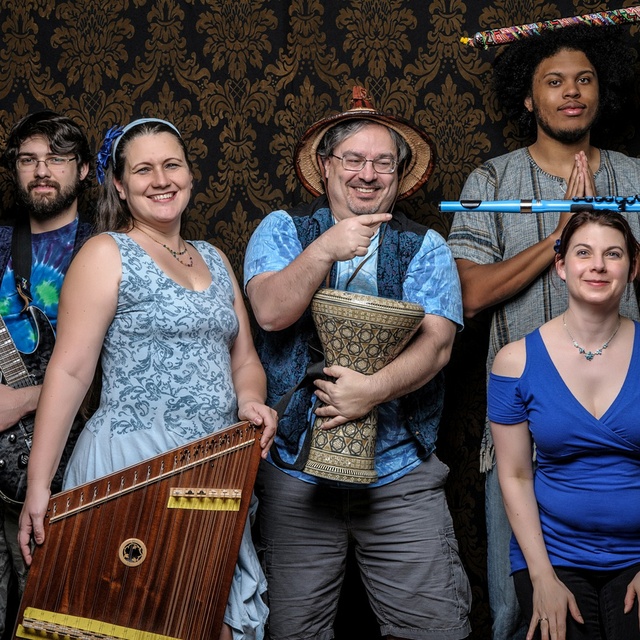 Hello, there! Thanks for reading.

We are a plucky trio, sometimes quartet, sometimes quintet (Hopefully, if you join us we can make some beautiful sex...tet) finding our way for a couple years now in the Bmore scene.

We are laidback and familial but purpose driven to bring world music back to intimate venues in the Greater Bmore area, with a CORE (no pun intended) focus on Bellydance (get it?) music (Greek, Pan-Arab, Armenian... think Ottoman Empire/Mesopotamia).

We started off, and to this day still are, laying down sick vibes for artists of Smaltimore to shake their bellies and booties to.

Like a parasitic twin, we have roots with our big sister band, Brinjal, but we eventually split off to create a name for ourselves in our shared Baltimore Fae and Recreation scences. While we didn't teeeeeeechnically coin our name till a year or so into our #winception, we've spent our time thinking of way to make our original Bellydance setlist even more funner and accessible-r.

Jacqui (Dulcimer, Aux Percussion, Dancer, Leader): Band Momma holding it down and packing it up in her station wagon when we have gigs that she helps us score. All that amazeballs and she still has time to continue developing her craft on her custom made piano dulcimer. She's not afraid to get out from behind her hammering to do some yammering playing our MC, and then dazzle us with her shimmies and Maori influenced Poi-Belly Dance fusions.

Outside of this plethora of performative and plenary power, Jacqui is the proud mom-mom of an alien and an imp who serve as entertainment during practices at her house. While you're there, might as well mooch some of her dope web design skills.

Gene (Doumbek, Aux Percussion, sh*t-Caller-Outer/Bubble-and-Eardrum-Popper): Hmm... what can we say? Nothing, just like Gene as he demonstrates the zen-like focus required to hold down our iqa'at (rhythms) with consistency and florid finger roll fills. You better have good reason to break Gene from his rhythmic trances, or he will break the sound barrier in your ear with a smack of his new mighty Doumbek.

Outside of drumming up some trouble, Gene is a bacon fiend who's zen focus also helps him endure the distances he drives to be with us. (If you ask nicely and are on his way, he might have a spare seat for you).

Charles (Vox, Melodica, Sound FX, Arrangement, Miscreant): Charles is the one writing this in third person. Charles does not know whyyyyy he would be labeled a miscreant over inserting a sex pun into band ad. In addition to making him the writing drone, his linguistics degree helps him sing all the languages... all. the. languages. It sure isn't helping him get paid, though. Good thing he learned music theory before he went broke so he can help arrange the scores. Maybe he could score if he shaved that crazy hair.

While he might arrive late to practice, he often comes with homemade goodies and listening ear that can give vocal advice to and vocally minded musos who would like to join, as well as healthcare advice.

Oh and sometimes Becky and Adam! Flute/Dancing and Guitar/Oud respectively. You might meet them if you stick around.