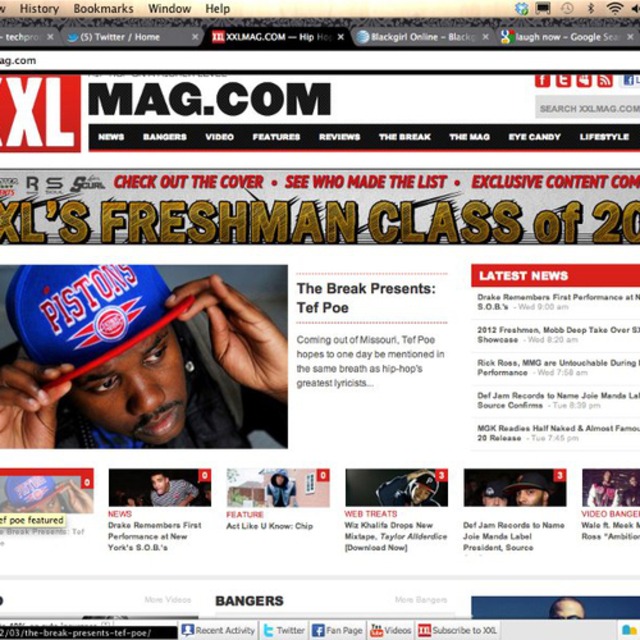 Born and raised in the Pine Lawn neighborhood of Saint Louis, Missouri, Kareem Jackson has been honing his weaponry in the war for musical supremacy. Through his unwavering integrity, genuine rhymes and expansive delivery, Kareem - better known as Tef Poe - is proving to the musical world that he is the commander-in- chief.
Tef Poe encompasses and continues to perfect the artistry and performance skills necessary to&#8232;go the distance in today's ever-changing musical climate. Originally building a reputation as&#8232;one of St. Louis' elite battle rappers, Tef has since risen through the ranks and positioned&#8232;himself as a seasoned veteran. His solo projects ?Glory To God,? ?The Redeemer,? Money Never Sleeps?, & latest release ?War Machine? have been well received by the public, critics, and media outlets alike.
Tef has commanded large crowds opening for Chicago's Lupe Fiasco in addition to being featured&#8232;in the SXSW Smoking Section Showcase. His hits ?Show Stealers,? ?Crazy,? and ?Out The Kitchen? have successfully cut through the propaganda and reached the masses via radio play in multiple markets. In addition, Poe has been featured on major hip hop sites such as globalgrind, thesmokingsection, thisis50, rockthedub and several more.
Tef Poe continues to lead his own plan of attack working with artists such as Murphy Lee and Kyjuan of the St. Lunatics (Derrty Ent./Universal) and GLC (G.O.O.D. Music/Sony) as well as performing throughout the country. He is determined to win the battle and the war. For him, there is no other option aside from complete and total victory. That mindset propels him beyond commander-in-chief... to the War Machine.