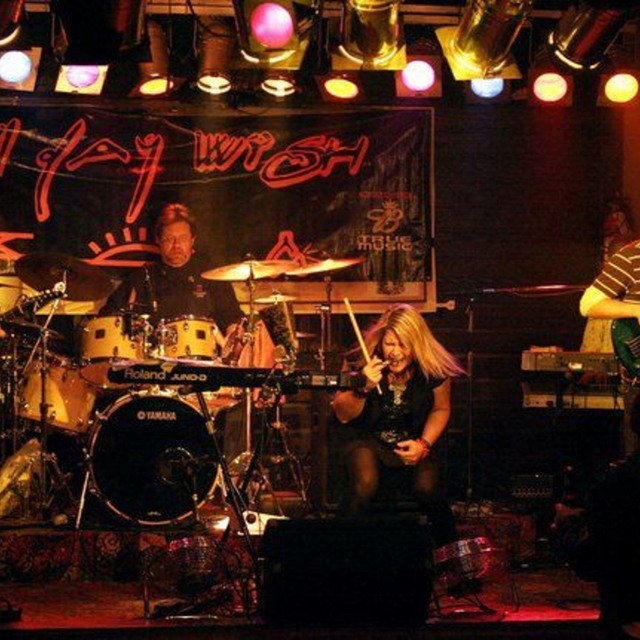 Ten Day Wish is a band that started 25 years ago as EXIT STAGE LEFT. Some former members have gone on to forge new successful band projects-while some have attained international acclaim in teaching. Founding members Tanya (vocals) & Sandy (vocals/production/ex-guitar) White-both stage performers for the majority of their lives, with a flair for the dramatic-try to make each show better than the last. Long time member Steve Tankersley (keys), with Kelley Chesney (guitar/vocal), Todd Shutze (drums) & Carlos Perez (bass) complete the puzzle. The "puzzle" has shared the stage with numerous national acts and opened for the likes of Blue Oyster Cult, Pat Benetar (her 1st tour after a long hiatus), Robin Trower, Tommy James & The Shondells and The Turtles. We have played 2 shows-in a packed bar and in a theater with the "fascinating" Gary Busey-yes, the actor. Had one wonderful night where Sandy produced and mixed the entire show (save the veggie tray), opening for the all-female 80's fave, Vixen. They had just come off several European shows as part of a VH-1 series. Management said it was better sound than they had opening for Zak Wilde.
SO...IF...alcohol was served, vows were exchanged, money was collected for a good cause, people helped us tear down before a tornado...IF...a 4th of July doubleheader was played, if a Blackhawk or Loach chopper landed, 4,000 people showed up expecting a band & beer (and there was only tea or Kool-Aid), kids ate ice cream and played tambourine, or got a standing ovation from 3,000 people for an acoustic blues rendition of Foghat's "Slow Ride" that caught rabies at the end, even if you passed some good old boys havin' their annual Halloween "animal sacrifice"(?) a couple of blocks before the bar...well--Ten Day Wish might have been there.

Everybody likes so many different things-as a cover band, we try to do songs a lot of people like. Duh. It's nice to have music degrees and experience in teaching, production, arranging and scoring-even radio programming (actually a lot of that) and defined aural skills...like how to tell if it's a guitar, a kazoo--or maybe a mix of the 2. It's finding great songs you can sound great with. Or throw a little spin on 'em to keep 'em fresh. You have to determine everybody's strengths & weaknesses. Then you learn the songs, then you go have a blast getting paid to jump around. And load-in & load-out. Uh--anyway...our influences are rock & pop & such...might toss in an original now & then...