The Spyders of HBG + Band in Harrisburg, PA 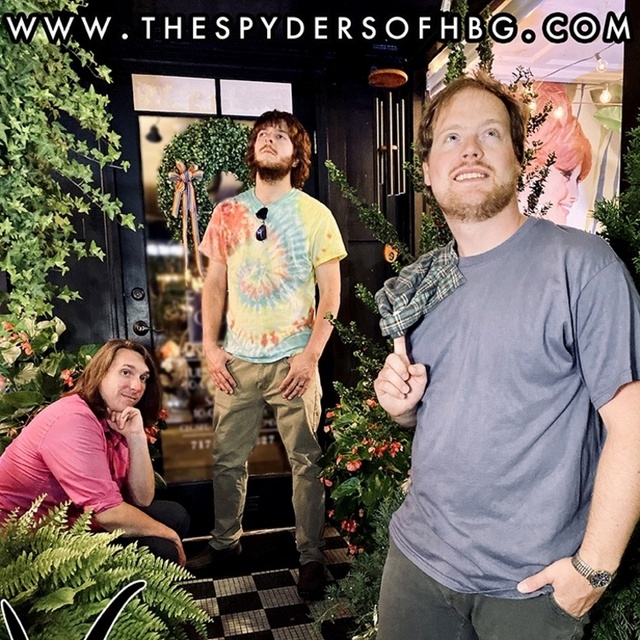 "The Spyders of HBG" are a rock and roll trio, formed in Harrisburg Pennsylvania by Zach Entenman (Guitar and vocals), Dan Ertel (Bass and vocals), & Benjamin Danner (Drums).

The band made its debut performance December of 2010. Their popularity led to returning performances culminating in a live performance to 200+ people at the “New Years Bash” hosted by the Middletown Area Arts Collective and featured in Middletown PA’s “Press and Journal.”

On December 19 2010, they recorded their first full length album "Insert Title Here" and sold 300 copies in the first month of release. Touring was ground to a halt as Zach entered the Active Duty Military.

Though progress was slowed they continued to work and in 2013 the group released a new EP called "Either Way." Their new musical effort won them artist of the week on the Bacon and Music Blog. On his review of the work Music Journalist David Gillet remarked, "It doesn't have the driving force that pushes you through most songs nowadays, but a classic getting together with your buddies in the garage feel; and I dig that...ALOT!"

IIn 2019 the band announced their comeback with 2 song single "Missing" and later that year released "A Christmas Tryst" for the 2019 Holiday Season. 2020 saw big movement with the release of 5 song EP “Just Gettin' By” and a music Video for "A'int Losing No Sleep". Touring and Live in Person performances throughtout 2020 became to hazardous during the Worldwide Pandemic of 2020.

In April of 2021 with the Novel Corona Virus fading in the background, the band decided to tour the country providing a virtual road trip/concert experience at some of the American Wests great locations dubbed "The Smore's Tour". Upon return they found the Music Video for 'Ain't Losing No Sleep" won entry into the East NorthEast Film and Music Festival (EXNE) for October 2021.

The Beatles, The Who, Buddy Holly, Fats Domino, Blink-182, Green Day, The Rolling Stones, Genesis, REO Speedwagon, Pink Floyd, Muddy Waters, Howling Wolf, The Maams and Papas, Buddy Guy, John Lee Hooker, JET, AC/DC The Ramones, TV, Angels and Airwaves, and many many many more. The groups formative sound is based in early 50's and 60's Rock 'n' Roll and R&B and Blues.

From thought-provoking dramas, documentaries, and shorts, to outstanding avant-garde works, every year since 2019, our multicultural event celebrates the works of new and innovative filmmaking talent from around the world. Featuring Musical Guests The Spyders of HBG

The boys Return to the Cassel Vineyards for another free event! Just a quick one though! Drink quickly for maximum effect!

Join the hottest event of the season as The Spyders of HBG perform with Big Gorgeous on their hometown turf Harrisburg, PA. Doors open at 7PM at the New HMAC in Harrisburg, Pennsylvania.

“BIG GORGEOUS is an energetic and over-the-top theatrical Perv-Pop band from the dark coal regions of Pennsylvania who now hail from San Francisco.