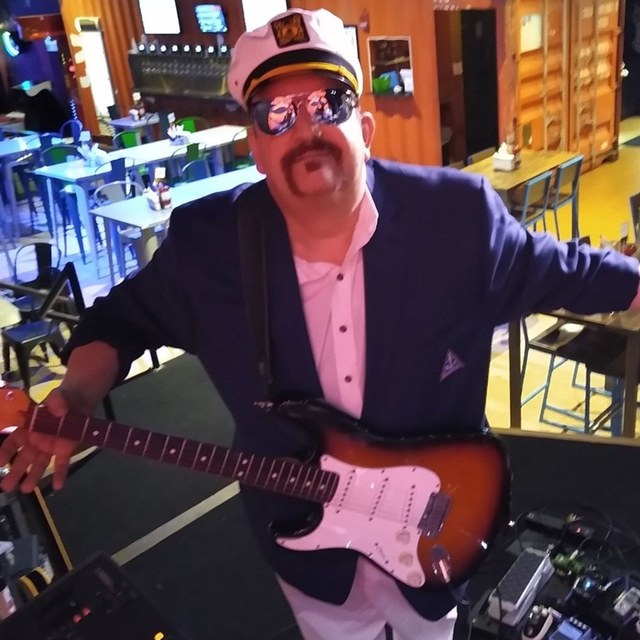 As Paul Butterfield would say, I was born in Chicago. At a young age I played the drums and moved to guitar at 13. I also play Bass and Harmonica. Music was, and is my whole life. From the time I could walk I was listening to Chuck Berry, Jerry Lee Lewis and Elvis. As I got older my influenced expanded from Muddy Waters to King Crimson.
In 1998, I added a Microphone to my arsenal when I got into radio as a morning show DJ in Kansas City. I worked in North Carolina, New Orleans, and Sacramento. It also enabled me to sit in with or open for some great bands and musicians. Phil Alvin (The Blasters), Better Than Ezra, Little Feat, Bruce and Tom Fowler (Zappa’s Mothers of Invention) Cake, Alien Ant Farm, and more. I was also able to sit down and talk music with Stevie Ray Vaughan, Jimmie Vaughan, B.B. King, Eric Clapton, Phil Collins, Paul Butterfield, Etta James, No Doubt, Pat Metheny, Lenny Kravitz, Cake, Alien Ant Farm, and More.
As a DJ on air, I wrote and performed many parody songs and was able to have them recorded. Besided being played on the air on multiple stations across America, These songs were also put on CD. During this time I was also a hired gun on a song from the band Real to Reel (80’s band) and one of my songs was used in a Sacramento Local Compilation for Charity.
In Phoenix, Jeff is also part of a band called Yachtstache (Yacht Rock from 70’s and 80’s) as well as a band called The Roaring 20-20’s (a Post Modern Jukebox style band)