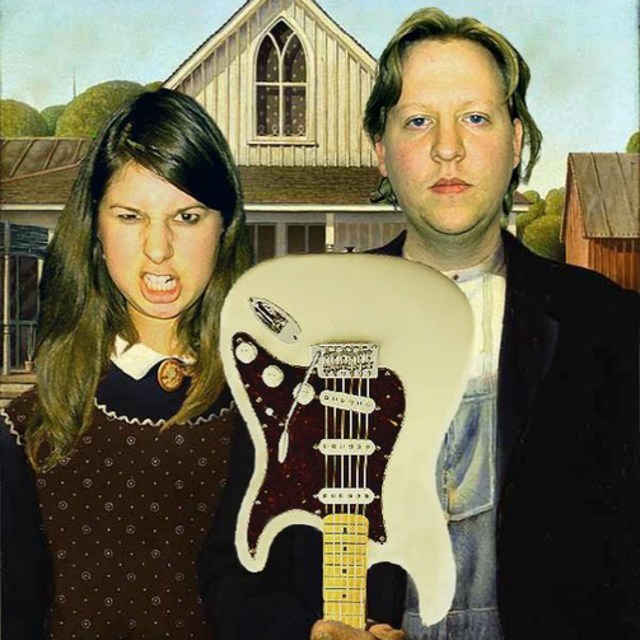 The Galt Line is a rootsy, screamin’ swing duo based in the Washington DC metro area. With wide-ranging influences that include R&B, Rockabilly, Western Swing, Jump Blues, and Gypsy Jazz, they have forged a sound that embraces music history without sounding antiquated.

The Galt Line started as a ukulele-guitar duo in 2008 when Blythe Crawford and Willie Gammell were living in Brooklyn. They perform now all over the U.S., electric or acoustic, in bars and coffee shops alike. They use their duo status to travel far and book for all situations.

Ultimately aiming to be a full-sized dance band, The Galt Line has developed an act geared toward audiences looking for a good time. Combining classic dance styles with a wry lyrical sensibility and wall-shaking energy, The Galt Line is less interested in moving people and more interested in getting people moving.

BLYTHE CRAWFORD (ukulele, vocals, bottle-cap leg stomper) began playing in April 2008 after receiving her uke in payment for service on the costume crew of Uke Jackson’s “Sex! Drugs! And Ukuleles!” (.sexdrugsandukuleles). Sprouting songs faster than a Chia Pet, she wrote tune after tune after tune. From blithely satirical Honky-Tonk ballads to Southern Blues romps and Swing-styled burners, she turned out songs in many styles that lyrically reflect her playful and critical perspective.

WILLIE GAMMELL (guitar) started playing at the age of 15, cutting his teeth on Blues and Psychedelic. Through playing, schooling, and teaching, he developed a solid technique and an ear tuned to the roots of American music.