The Year Off + Band in Nanuet, NY 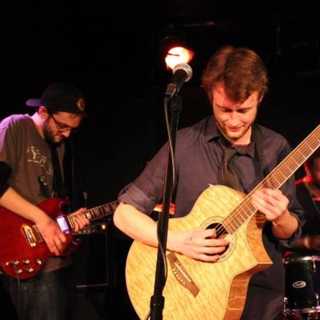 "Make them Shut Up and Swim."

This lyric from The Year Off's "Bethany" can be considered their mission statement. It's why they chose it to inspire their new debut album, "Shut Up and Swim."

"The songs all have this message about having a time for talking and a time for action, taking control of your life and making the good things happen...that I didn't intend as a through-line. I'm really glad it's there, since that is what we've been accomplishing as a band," says frontman Nick Dawson (lead vocals, rhythm guitar, songwriter)

The music began with Nick and an acoustic guitar at local open mics in Orange County, NY. While he mostly played cover songs by artists like Jason Mraz, Regina Spektor, Dispatch, and Blues Traveler, it was his originals that could really catch a noisy room's attention. His songs combined a Jason Mraz style love of language with a folk feel for storytelling, and a Billy Joel need to rock. Each song had a distinct feel, almost it's own genre, but they all were somehow tied together by a unique sound to Nick that was born out of his honest, emotional life.

His voice caught the attention of Rockland County native Dave Baron, who was playing bass in an original rock musical that Nick was performing in. "I had been looking for an original project, so I asked if he had any material he was willing to show me. I didn't know what to expect, but Nick sat down with his acoustic guitar and played me almost the entire 'Shut Up and Swim' album. And it was good", says Dave.

E Samson Milien didn't own a drum kit when Nick recruited him for the band, but his talent was so off the charts that it didn't matter. The trio were soon playing at open mics as "The Nick Dawson Band", usually at the Parkside Lounge in NYC, or wherever backline was provided and E Samson had something he could bash on. They had cycled through a few lead guitar players before Alex Marino auditioned and completed their sound. He had a quiet demeanor juxtaposed by firey lead guitar playing, with a unique style that could make even the most grizzled soundman look up from his cellphone and take note. They had a band that felt unstoppable. Nick's voice and songs, Dave's dynamic basslines (Many fans have marveled, "He doesn't stop! He just keeps going!"), Alex's uniquely charismatic classic rock guitar leads, and E's soulful back-up vocals and drums born of an R&B lover. It all came together to create a fun, tight, polished but raw, emotional package that audiences fall in love with.

"Shut Up and Swim" will be The Year Off's first chance to really show what they can do, but they also want to give back to their incredibly supportive community. The disc features a song called "Melissa," written to celebrate a friend of Nick's who had passed away after bravely fighting leukemia. A portion of the album's proceeds will be given to a Performing Arts scholarship in her name at Rockland Community College where they were students.