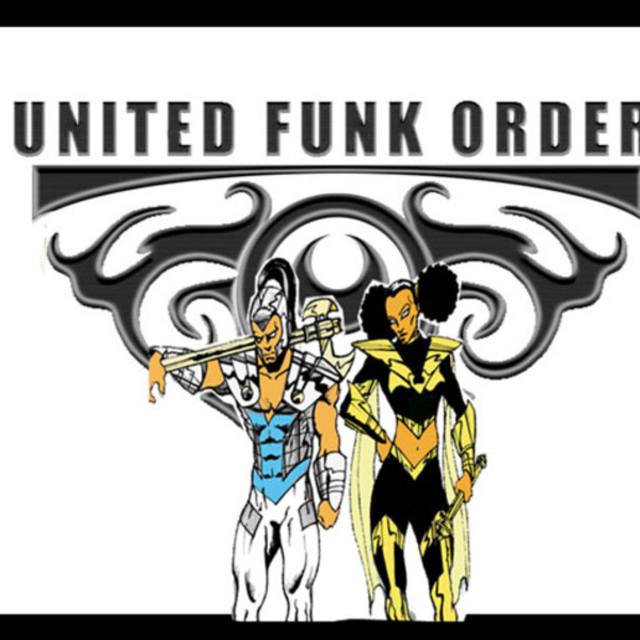 Once upon a day, the powers that be decided to remove the musical creation we had come to know as FUNK from the record store bins and formats of radio stations worldwide. The primary intent was to completely obliterate the concept of FUNK from our collective consciousness in order to facilitate the control of our thought process and reprogram our minds to their liking. They attempted to exterminate all interference from the forces of those "rebellious Funkateers". They almost succeeded in crushing the resistance... but... it's a new day and United Funk Order has arrived to remove all restrictions currently imposed on your memory banks so that you may once again enjoy the groovalicious music your subconscious has been secretly craving for... rockin' it hard and funkin if slow for ya………

Currently the world of music seems plagued by large doses of mediocrity and an overall deficiency of truly compelling music.... it seems artists and record companies are often driven by financial considerations as opposed to heartfelt inspiration. Spearheaded by Thulani and Indigo, United Funk Order is on a mission to restore balance to the musical equation. Their existence is proof positive that quality, integrity and musicianship need not be sacrificed for the sake of a dollar.

Just beamed out of the studio, and onto the music scene. Intergalactic-Funk-Rock Band “United Funk Order” headed by the Multi-talented Thulani and Master Guitarist Indigo is pleased to present their new music CD set for first quarter release. Phenix Productions presents Intergalactic-Funk Rock Band “United Funk Order”. Headed by Multi-talented Thulani and Master Guitarist Indigo the band’s vibe is rooted in classic funk and contains elements that appeal to diverse audiences. Thulani, Founder, is a Lead Vocalist/Composer/Producer/Musician-Percussionist of “United Funk Order”, whose artistic abilities have been molded from a unique blend of international experiences. Her energetic vocal style is deeply influenced by an appreciation for the R&B, Rock and Funk classics of Tina Turner, Chaka Khan + Rufus, Mothers Finest, Cameo + George Clinton.

Indigo/Co-Founder, is a composer/Producer/Musician-Lead Guitarist whose music hearkens back to a rich musical period. His influences include a diverse spectrum of artists such as Jimi Hendrix, Santana, Sly Stone, P-Funk, Mother's Finest, Bob Marley, Paco De Lucia, Led Zep, jazz greats Miles Davis, Bird, Trane, Monk and other legendary talents. Great music has a transcendental element capable of lifting the soul to heights above and beyond life's daily grind. Indigo is fully aware of this magic and strives to include this element in all his musical compositions. He's not subject to the trappings of the past but pays all due respect to the pioneers while carefully guiding his music into the future. Since the day he first laid hands on a musical instrument, playing music has been second nature to Indigo.

The band’s music demonstrates the funk/rock vibe, African rhythms with a Funk-a-delik groove. Indigo explains this album has sounds from “Bono to George Clinton with passionate rhythms for healing the soul. Thulani adds, “We need to express our music through the eyes of the people who are suffering. The world needs answers and they need them now for their lives today and tomorrow.” United Funk Order has created animated musical characters to add multi-media facet to their products and service offerings. Caricatures of band members have been developed as Super Heroes and are linked to other digital and animation products. The characters in the United Funk Order animated band use a world tour to battle evil and convey positive messages.

Screen name:
thulani
Member since:
Nov 03 2004
Active over 1 month ago
Level of commitment:
Touring
Years together:
8
Gigs played:
Over 100
Tend to practice:
2-3 times per week
Available to gig:
1 night a week
Age:
50 years