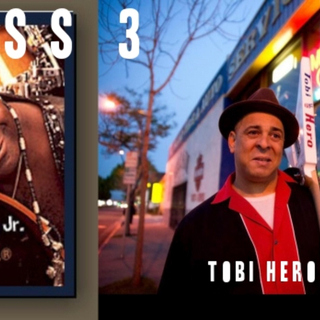 "Being the grandson of Bessie Munson and third cousin of legendary bluesman King Curtis influenced and enhanced the musical career of Tobi Hero in ways we can only imagine. His life from the cradle until today has been filled with some of the best Jazz and Blues music in American Music History, music which he experienced LIVE and Unplugged. Tobi Hero has been performing professionally since the 10th grade and has never looked back."
During the early 1990's, Tobi performed at various restaurants in the San Gabriel Valley while writing and performing with other well known musicians in the area. His skills "led to concert promoters tapping Tobi Hero to open concerts and other large arena events to entice larger crowds."
Tobi Now Tours & Plays with DELMAR BROWN, DENNIS CHAMBERS, JAMES BRADLEY JR, GARY GRAINGER, LEO NOCENTELLI, SINBAD, DANA HAWKINS, & more)

Screen name:
TobiHero1
Member since:
Nov 01 2014
Active over 1 month ago
Level of commitment:
Touring
Years together:
30
Gigs played:
Over 100
Tend to practice:
More than 3 times per week
Available to gig:
4-5 nights a week
Age:
56 years

Everyone on the Planet !
CONTACT for GIGS OR TOURS (Tobi Hero on ) inbox us the details
I am always looking for Premier Drummers, B3 Players, Bassists, & Horn Sections (send me contacts on )

Who Ever can make the Gig either in the US or Overseas
But on the Roster, ( JAMES BRADLEY JR, DENNIS CHAMBERS, RONALD BRUNNER JR, DANA HAWKINS, NICK SMITH, SEKOU BUNCH, HANS ZERMUHLEN, SINBAD, GARY GRAINGER, DELMAR BROWN,
For $Hiring$ Tobi Hero please send to (tobihero1) $$

Lots of Gear , Class A Tubes !