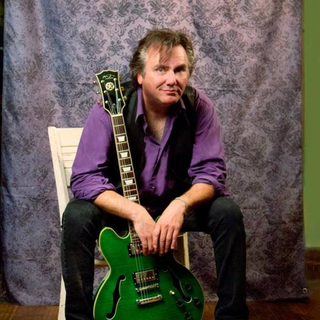 Born and raised in southeastern Wisconsin, Todd Voss began his career in music in his late teens after witnessing his first concert. The bombast and spectacle of KISS made a huge impression on him. The very next day the guitar that had been languishing under his bed for 2 years was pulled out and the journey began.

Practicing, gigging, recording and touring became a full time obsession for Todd at this point. In one of his first bands a band mate who was tired of his constant noodling suggested the nick name “Noize” as “That is all you make”. The name stuck as the love affair with the performing and playing continued.

Many bands and many miles on the road were the norm at this point as he crisscrossed the United States and Canada playing in all types of bands and in all sorts of venues. From arenas, to festivals to large and small clubs Todd has paid his dues.

Todd “Noize” Voss has shared the stage with many diverse artists (J. Frank Wilson “Last Kiss”, Johnny Petillo “Danny & the Juniors). He has opened artists such as Neil McCoy, Neil Zaza, Escape Club, the Rembrandts, the Elvis Brothers and many others. Many active and retired military personnel have been entertained by him as he has performed for troops in Saudi Arabia, Kuwait, Bahrain, Germany, Italy, Greece, Spain and Turkey.

Todd “Noize” Voss’ many musical influences and heroes are Ace Frehley, Brian Setzer, Rick Nielsen, Jeff Beck, Warner Hodges, Neil Giraldo, Billy Gibbons and many others. Currently based in central Florida, He is working on a CD of all new material with a scheduled release date of summer 2012.