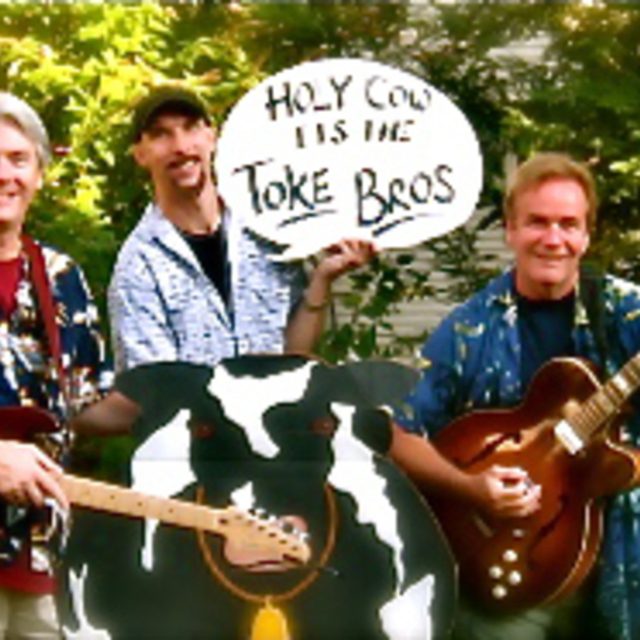 The Toke Brothers are known for their out front vocals and unique harmonizing style.
We cover major acts from Dion and the Belmonts through the Gin Blossims to Green Day. Parrot Head and Dead Head are spoken here !!
The Toke Brothers play as either a trio or Duo.
Very interactive we pass out Tambourines , maraccas and kazoos. The crowd are never passive spectators. Every gig is a "Party On " affair !!!!

Mike " PaPa " Toke and his brother Jef " Woody " Toke are playing on the deck.
The brothers have a knack of playing songs you'll want to tap your feet to and sing along with.
Grab a tambourine cuz U R part of the show!
Win Prizes when it's music trivia time!
Zia's has a great atmosphere, very friendly and they r located at 2350 N Reading Rd Denver Pa

Have a great dinner first ( maybe something greek?) , then come into the lounge to watch...
the TOKE BROTHERS TRIO. PaPa Toke, Woody Toke and their Cuzin Bill Toke will get you singing along or banging on the tambourines they pass out.
The Toke Brothers are known for their 3 man harmonies and the way they reshape music to a form they call
" Acoustic Retro Rock"
D&S Brasserie is located on 1679 Lincoln Highway East Lancaster, Pa
http://www.tokebrothers.com
CLUB OWNERS: to book, call PaPa Toke at 717 572 4917

The TOKE BROTHERS TRIO, famed as the leaders of the " Acoustic Retro Rock Revolution" are bringing their interactive show to Bube's. Be prepared to play tambourine or grab shakers, cuz UR part of the show!
The Toke Brothers are known for their three man harmonies and their unique way of reshaping songs!

Bubes Brewery is a unique venue, very historic and a favorite of regional musicians.
It is located at 102 N.Market St Mount Joy Pa