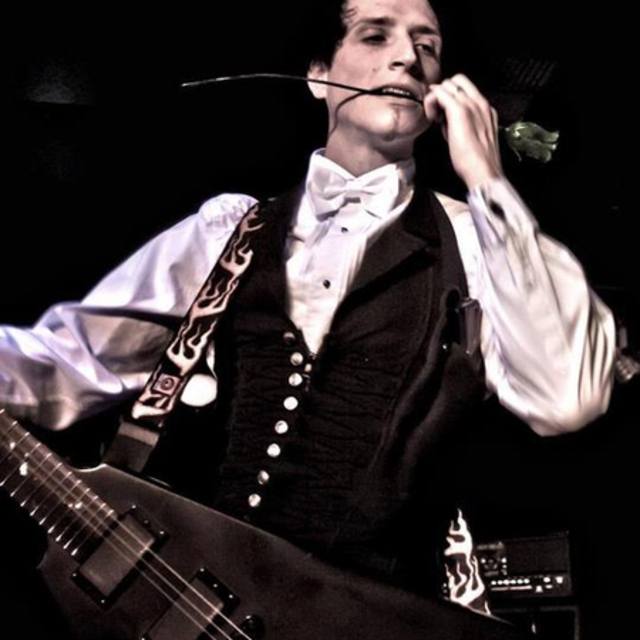 Music is in my heart and soul, I can't imagine life without it. As such I will go anywhere and do anything to make it my career. Seventeen years of experience, full musical education and even 3 years of a Musical Performance major have given me the chops and know-how to play, write and, most importantly, perform professionally and engagingly. Music is my life and if you feel the same, want to play music for a living... To be on stage in front of thousands of screaming fans and create something lasting and extraodinary, hit me up and let's play! I play all the insrtuments listed, though I'm most in shape on Lead Guitar and backing Vocals, having persued them most recently. A good majority of my background was spent in Drums and Percussion including 6 years of Marching Band and Drum Corps, though I am a bit rusty. I'm capable of playing bass but would need to practice up on slapping and bass-specific tapping. Finally, I am more than willing to lead sing/frontman and am in lessons for voice now and also learning to Scream-sing. I absolutely consider a lead singer's most important responsibility to ENGAGE the crowd while also singing... Music is only one part of this if you're going to do it with the pros! Fun fact: I'm left handed and play Guitar and Bass as such. Still regular on Drums though.

I am influenced by nearly everything, save Country, Pop and Hip-hop/Rap, yes including Classical. However most heavily Metal, Punk, Swing and Rock. My major influence for Guitar is Avenged Sevenfold; Epic scale, soaring harmonies, complex and rich melody and a fair degree of technicality while remaining absolutely clean and precise. For drums I would have to say Neil Peart and Mike Portnoy, from RUSH and (formerly) Dream Theater, respectively. Vocally I love using both Singing and screaming (where appropriate) in my music. Mixing rich, beautiful harmony of multiple voices and the raw intensity and edge of Scream, again see Avenged, along with AFI and My Chemical Romance, and Fall Out Boy, at least for melody.

At the moment I've just gotten my Custom Schecter Avenger finished, with my back-up being a Schecter V-1 Special. A full stack from Ibanez, though I will shortly be upgrading to Marshall or Bogner. My pedalboard is constantly evolving and does include a volume pedal for fine tuning live. I have a 6-piece drumset from PDP with mostly Sabian Cymbals and a double bass pedal, as well as a few auxiliary bits I.E.; Tambourine, shakers, cowbell, congas and a few others. I have a 4-string Rogue Bass for recording, though no amp to accompany it at the time. I have 3 mics currently, the primary of which is my Shure Super 55, great classic look and edgey sound, along with a small vocal amp head, which I tend to run through the other half of my stack, as I don't have PA speakers right now... I also have in-house (literally) recording facilities on my Computer, of which you can hear a sample in the "Throw Down" rough track on my profile.