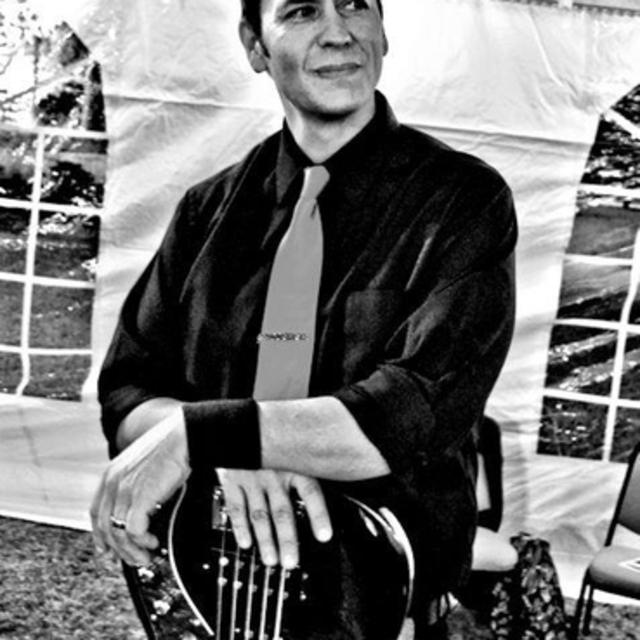 Woody is a professional bassist with 30+ years of live performance and studio experience.

He began his musical journey at the age of 10 beating on an old acoustic guitar given to him by his uncle. His mother saw his fascination with the instrument and put him in lessons. His new playing ability paired with natural singing voice made him a staple at public recitals and community theatres for the next three years.
It was during this time that Woody heard his first Rush album and the mastery of bassist Geddy Lee. He was drawn to the aggressive style and tone that Lee brought to the music. Mom again saw the desire and acted accordingly. She acquired his first bass guitar and Woody began studying with Eric Watkins, longtime bassist for Blood, Sweat & Tears frontman Jerry Fisher. Woody started maniacally breaking down every Rush album by ear and sharpening his skills with Watkins through his early teens, delving into funk and soul traditionalists Larry Graham, James Jamerson and Donald “Duck” Dunn.

In 1985, he struck a friendship with Chris Cuevas who had just recently won the national Junior Star Search competition, and their styles clicked instantly. Woody and Chris played together in various incarnations of local rock bands until 1989 when Chris departed for New York to finalize his long awaited recording contract. In 1990, Woody was recruited by Cuevas to record on his Atlantic Records debut “Somehow, Someway”, and fill the bass chair on his upcoming U.S. tour supporting the album opening for teen pop icon Debbie Gibson.

At the end of his time in New York, he relocated to Atlanta and began explore more unorthodox techniques, being inspired by the sounds of Doug Wimbish, Tony Levin, Billy Sheehan and Stuart Hamm. Seeking more exposure into fretboard tapping, he befriended and studied with future Peter Gabriel protégé Joe Arthur. Over the next ten years he continued to refine his style and tone while anchoring numerous local acts including progressive rockers “Blackhouse”, punkers “Beefhead”, and the trippy “Scoring Dope For The Ultimate Woman”.

Woody finally settled in Charleston in 2002 and took time off from music to pursue his burgeoning career as a Chef and spend more time with family. His wife, Mary, surprised him one day with the gift of a bass, since he hadn’t owned or played one in quite some time. It sat for 3 weeks until he picked it up just to see if he still had it. It was rusty, but it was there. He committed himself to starting up again. Woody bounced with a couple of local Charleston bands for a year getting back into playing shape,

Woody can be seen all over the Lowcountry in the bass chair for "The Real Hot Sauce".