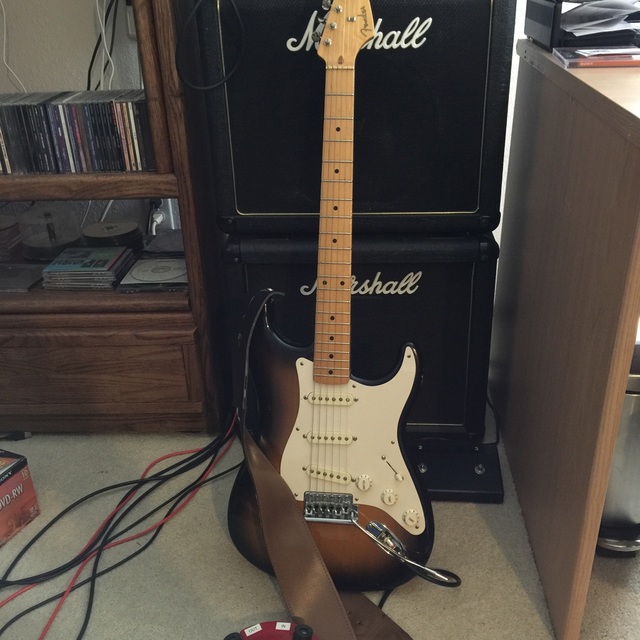 Four recording made in home studios. On the first track (My Best Friends Girlfriend) I am playing live in the studio and I am playing all guitars and singing backing vocals. This song demonstrates my rhythm guitar playing and also my lead guitar playing. I did this in one take live on site, the overdubbing of some rhythm guitar parts was done by the soundman after the recording was performed by just looping the recorded track with splices. On the second track by Chic, keyboards created a midi track to mimic the vocals. My guitar track (only one track) is played live with no overdubbing. Although this track is not a characteristic example of my guitar style or musical preferences, it does demonstrate my ability on guitar to play rhythm guitar and maintain a concise meter or timing on guitar along with good guitar tone. The four samples recordings should give a good idea of what I can bring to the table in a band situation. My first priority in any music ensemble, is to sound good and to me that equals good guitar tone and rhythmic timing. Tone is what I am after :-) ! norm.rivers somewhere at the g mail that communicates.

Hendrix, Zep, Floyd, Steely Dan, Kings X, Robert Cray, Muddy Waters, Blue Oyster Cult, The Cars, Heart, Sabbath, Coltrane, Better than Ezra, Spin Doctors, REM, Metallica, Aerosmith, The Police. WTF, what a hard question to answer! Lots of influences both as a fan of particular artists or bands or as on an indivdual level with the musicians I have known and played with. I am at home with rock, funk, alternative, jazz, blues, etc. Hope you get the picture but I like and will play a lot of stuff.

To much to list. Some of the pictures I posted will give you an idea of some of the equipment I have. I have collected tons of it and it all has its uses. I recently started playing keyboards / synthesizer and I am beginning to feel comfortable with it. Tone is what I am after. norm.rivers@gmail.com