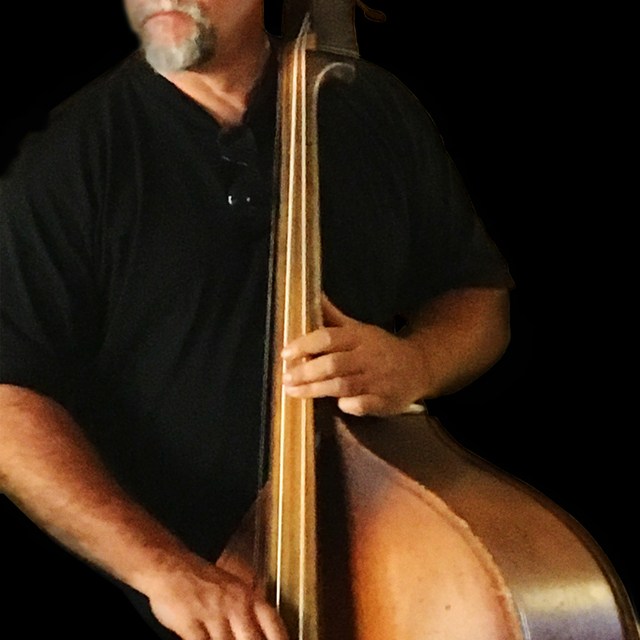 PJ is a classically-trained string bass player with heavy experience on electric bass and guitar, an imposing physical appearance and a growly Johnny Cash-like singing voice.

A native of Fordyce, Arkansas (that's near Kingsland) and a preacher's son, he cut his musical teeth playing southern and contemporary gospel music in church. He got his 'ear training' for bass and harmony from a gospel singer named Everett Cone, during PJ's formative years in Harrison, Arkansas.

PJ recalls, "In the 1930s, Mr. Cone sang bass in a touring group known as The Melody Four, with the legendary Albert E. Brumley, who wrote 'I'll Fly Away' and 'Turn Your Radio On'. I'd sit next to Mr. Cone in church, and he'd patiently go over the staff and notation in the hymnbook and insist that I sing the bass part, even though I couldn't hit the low notes."

When he was 9 years old, his grandmother gave him his first guitar - her old 1937 Capitol Gibson flattop. His dad taught him his first chords, and PJ seldom put the instrument down.

Harrison was home to a number of musicians who played regularly in nearby Branson, MO. One such notable picker, Jack Howell, had a strong influence on PJ. In the mid-1950s, Jack took over as lead guitarist for singer Upton Horn when Red Gale left Horn to join Porter Wagoner's band (Gale later worked with Jim Reeves and Buck Owens, and had a career as a session player in Nashville and Los Angeles.)

PJ married Jack's lovely daughter, Linda. Jack and PJ worked together on a number of impromptu music shows in Harrison before Jack's death in 2018. In the profile photo, PJ is seen playing Upton Horn's 1938 Kay bass.

Shortly after his family moved to St. Louis, PJ began studying string bass, first under the tutelage of Eugene Beatty and later, James Eaton. Guitar in hand, he was often at jam sessions at pedal steel hall of famer DeWitt Scott's music store, bringing PJ into the acquaintance of local pickers. An older friend, Dave Williams, worked in a band fronted by a drummer named Tom Schumann. At age 15, PJ's initial onstage efforts on guitar and bass were playing country and country-rock with Schumann's band in what was then rural St. Charles County. No one seemed to mind that he was underage, and his Merle Travis style of guitar-fingerpicking made him a unique feature.

By age 19, after a couple of semesters as a Mass Comm major and a stint behind the mike at the campus FM station (having declined a string bass scholarship), he was faced with deciding between a tour offer to back the Cathedrals and moving forward as a recording session player and producer at Earth City Studios in St. Louis. The latter won out, and his next years were in either the studio or the control room, creating and collaborating on commercial jingles, film soundtracks and artist demo recordings.

During this period, PJ's work brought him in contact with the likes of Nick Nixon, England Dan & John Ford Coley, Barbara Carr, Carl Albrecht, Mama's Pride, Meri Wilson, Tom Brooks, Head East and many local artists around metro St. Louis. He was a fill-in player for bands fronted by locals Rick Waters and Kenny Valeck, and briefly with his own contemporary gospel group, Belief, opening for Andre Crouch at Kiel Opera House (now known as The Peabody) in 1977. For a short time, he worked as a salesman and music instructor for the now-defunct McMurray Music Company - also known as "McMarkup", less-than-affectionately by local musicians.

A 1978 career move brought him to Maritz, Inc's Communico division (at the time, the world's largest producer of corporate and industrial events, theatrical presentations and motion pictures) as a floating producer. Working in several departments - multi-image, film/video, and sound - he came in contact with a "who's who" celebrity list of international music, television and feature film artists during these years. And he recalls tracking vocal sessions with a young schoolteacher named Sheryl Crow, holding late sessions so she could get there from her day job.

Initially influenced by his boss, Oscar-winning producer Joe Wills, PJ's collaborations included film scores and soundtracks. He later moved behind the camera as a director and editor, winning several dozen international awards for his efforts. As a record producer, one project from those days that he recalls with fondness is KWK-FM's "Moonshine II" album. Recorded live at the The Rose, back when KWK eclipsed KSHE as the reigning rock powerhouse in St. Louis, it featured Mama's Pride, Street Corner Symphony and several other popular local bands.

He continues to write and perform, and has penned a collection of songs that take a humorous look at everyday life. He occasionally finds time and place to do a one-man set of his own tunes.

Really, anyone who is good! This list just scratches the surface...