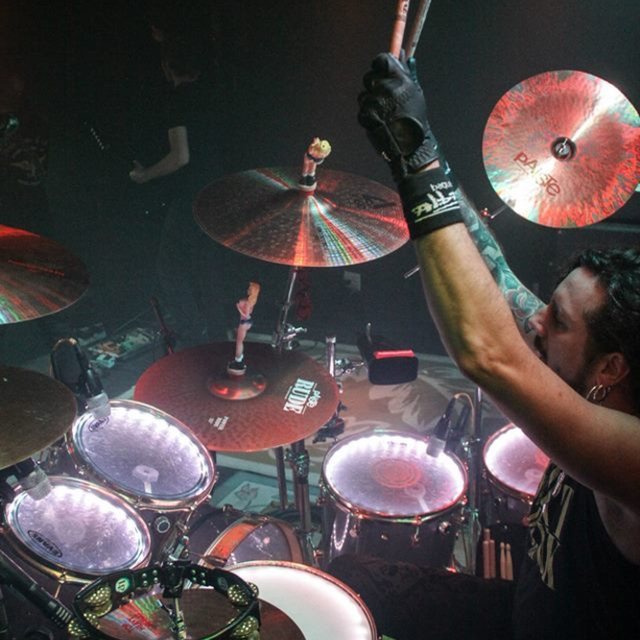 Born in Sao Paulo, Brazil, son of physicists, Ivan Copelli is a full time drummer. He's a self-taught musician, who fell in love with the drums after watching a Kiss concert with his mother in 1983, at the age of ten. His life and soul were never the same after that night. He started to play drums with his mother's knitting needles and phonebooks. When he was 14, already with a real drum kit, he played his first gig.

On the road now for over 30 years, Ivan has gone through all kinds of situations on stage. From small and badly equipped stages to big arenas, he gained experience and shaped his style, driven by the desire to always deliver an unforgettable performance whatever the size of the audience. Of a humble background he learned very early to value every little detail of his instrument, as well as the value of being respectful and cordial to all who appreciate his work. These concepts were crucial to build his own fan base.

Ivan has played in many bands throughout his career and is recognized for his solid work in the Rock scene in Brazil. He played in bands such as Bueta De Huda, Saia Balao, Bomba-i, Motores, Kiara Rocks, Burlesca and participated in the recording of 8 albums, several videos and has a solid fan base now. With Motores, Ivan participated in MTV LA's reality show Rally MTV and won first place, leading the band and the career of its members to unparalleled international levels. His music and image became known from Tierra Del Fuego to the USA. After Ivan left Motores, he joined Kiara Rocks and his days reached an incredible pace, playing 2 to 3 gigs a week. With Kiara Rocks he recorded an emblematic album, produced by his friend Matt Sorum (former drummer for Guns'N'Roses, The Cult and Velvet Revolver). In the beginning of 2013 he left Kiara Rocks and founded Burlesca, loyal to his music style and to the respect he has for his fans. With Burlesca he had a blast nationwide after their first CD was released, achieving great reviews amongst the specialized media and, most important, packing the venues where they played.

Ivan Copelli is also the proud owner of the acrylic drums brand called Hutch Drums and because of it, has made contact with thousands of drummers within Latin America countries and overseas. However, in 2015 a whole new level twist came through and he moved to Los Angeles. Bringing his company to America was not the only move but his drummer career too. In the US he was immediately recognized by his background and joined Voodoo Kills, a rock band from Hollywood. Their first album has been recorded at Studio City and mixed in France after a year of hard work on creation. February was a landmark for the band, when they could finally release the album and their second music video. After some great performances in Los Angeles at venues like Viper Room, Sinister and Roxy, Ivan decided it was time to move on. 2017 is just beginning!

Check it out more about Ivan Copelli at:

van Copelli was strongly influenced by Eric Carr, John Bonham, Ian Paice, Nicko McBrain, Alex Van Halen, Phil Rudd, Bill Ward and Steven Adler. Early on he realized that a good Rock 'n' Roll needs to be consistent. His energy comes from this, and not from physical strength or notes in excess. His motto is: “Play for the music and not for yourself”. Ivan is sponsored by Contra Grife that provides the clothes he wears; Spy Eyewear, that provides his sun glasses and he has also his own signature drumsticks, provided by Alba.