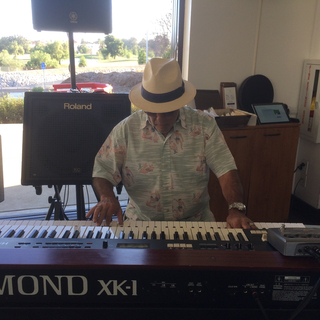 I played keyboards in a local Orange County band for 13 years. I played piano and Hammond organ. We generally practiced/rehearsed once a week for 4 hours. We played everything from classic rock to blues, and little bit of country. It was a 5 piece band; keys, lead guitar, bass drums, lead singer. We also had a player who played congas and sat in with us from time to time. We were a "working band", primarily a club band playing venues such as Rembrandts (now the Royal) once a month for 6 years, Pierce Street Annex once a month for 3 years, The Post Rockwells, Sammy's, The TreeHouse, The American Legion in Newport Beach once a month for 3 years and private parties, weddings, concerts in the park for cities of Brea & La Mirada, and many other venues. We generally played 4 hour gigs sometimes 3 hour gigs. Besides playing in the band I booked the band most of the time (so I still have all those contacts), made sure we got paid, took care of postings and managed the website, sent out emails (I still have that list and it is huge) and made posters/flyers for the band for posting at venues and online. I played my last gig with the band on Labor Day of this year. I left the band for the usual reasons that people often leave bands. I was not getting along with some of the new personnel and direction of the music as well as a family issue. The lead guitar and bass guitar and I played together from the very beginning almost 13 years. We still remain close friends but my presence in the band was causing stress for everyone for the sake of the band it was best that bow out. I find that now that I'm not playing regularly I miss it so I'm looking around for a new home. A blues band would be great, but I'd be happy in a band that plays classic rock as well.

Rock & Blues from Beatles to Petty to Stevie Ray, Mellencamp, Stones, and the list goes on and on. Our song list was close to 100 songs long. We generally played between 35-40 songs at a gig.